The drive from HSST is based on the principle of the linear motor . In contrast to the Transrapid , the stator of the linear motor is installed in the vehicle and not in the rails. Since no voltage can be induced in this way, the vehicles always need a power supply (275 V), which is produced via grinders to the rails. The electromagnets are positioned under the rails, so that the train attracts itself towards the rails and does not repel it as with the JR Maglev . The distance to the rail is controlled by a sensor.

The key technology HSST was transferred from Krauss-Maffei Transurban.

HSST-02 was built in 1981 and offered space for two people, the test vehicle reached a speed of 110 km / h. The vehicle is guided inside.

The HSST-100S was a test vehicle suitable for local traffic, consisting of two sections, each 5.5 m long, weighing 10 tons and able to transport 67 people. It had 6 drive modules.

HSST-100L was kind of a pre-production vehicle and was quite similar to its predecessor. It also consisted of two sections, each 8.5 m long, weighing 15 tons and able to carry 110 people. The vehicle had 10 drive modules. 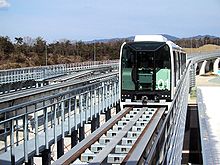 Linimo is the first commercial application and was set up for Expo 2005 . The 8.9 kilometer line connects the Fujigaoka subway station with the Yakusa station on the Aichi ring line.