This article deals with the item of clothing suspenders, for the track connection in rail traffic see switch (train) #Special designs .

Braces by Albert Thurston, combined to clip on or button on

Braces (formerly pants lifting ) are bands that are attached to the waist and over the shoulders. They ensure that the waistband is at the correct height at the waist and thus have the same function as a belt .

Suspenders consist of two mostly woven bands made of rubber , felt or silk , which are attached to the waistband with the help of buttons or metal clips.

They are available in an H, X or Y shape. The H-shape runs parallel upwards from the attachment and over one of the wearer's shoulders. In the X-shape, they are crossed over on the back, usually with the help of a piece of leather , sewn together or held together by a metal clip and slide together and then run to the clip diagonally opposite their origin. Sewn variants are also available in a Y-shape, in which the two bands come together at the seam to form a single band running vertically down the back.

Classic straps do not have clips, but rather woven tabs or leather roll-up pulls with which they are buttoned to the trousers . At the front are the buttons to the right and left of the fly , at the back there are fabric bottles with buttons protruding from the waistband. High-quality trousers are made either for belts or for suspenders, so the corresponding trousers do not have any loops on the waistband (as is the case with tailcoat trousers) and the suspenders are the only choice. The waistband for suspenders is usually wider and higher (at the level of the navel) than that for belts.

Most suspenders have parts, usually on the front, with which the length of the strap can be changed. In this way, braces can be made in a few, fixed lengths, while the fine adjustment is made by the wearer himself.

Normal suspenders are cut in such a way that nothing of them is visible when a suit ( jacket or vest ) is worn over them. In traditional costumes, however, they are intentionally a visible part that is often heavily decorated and embroidered. They can also be made entirely of leather.

English men's tailors use special trouser cuts for exclusive use with suspenders.

At the beginning of the 18th century , suspenders with crossbars appeared on work and children's trousers as well as in folk costumes. At the end of the 18th century they became common practice for men and eventually even became a male gender sign: in southern Germany there was a popular belief that the father's suspenders hung out of the window during pregnancy led to the birth of a boy.

In the 19th century , X-shaped suspenders were worn hidden under the waistcoat as they were considered underwear. Only with traditional trousers was it always a visible piece of jewelry. In 1819 Thomas Hancock used rubber to make elastic braces.

Around 1913, with the gradual omission of the vest in everyday wear and sports suits, suspenders were replaced by belts . However, if you have a strong belly, a belt cannot keep the pants at waist level, so the use of suspenders makes sense in this case.

After World War II it bore the braces in Germany or in the evening trousers, now mostly only at the Frackhose , apart from its use as a kind of tool in everyday life.

For a time in the 1980s, it was yuppie fashion to wear colorful suspenders based on the American style. This also had its effect in the stock market thriller Wall Street (1987) by Oliver Stone , in which Michael Douglas used flashy suspenders as raider Gordon Gekko. This should embody belonging to senior management. In the 1980s and 1990s, many women also wore braces.

It is also common among skinheads and punks to wear suspenders. These are either used, as in the real sense, to wear the trousers or worn hanging down as an accessory . 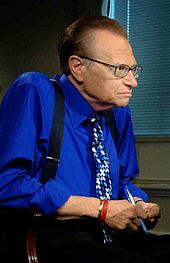