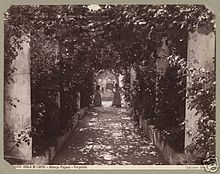 Pergola in the garden

Pagano was the name of a hotel on Capri founded in 1825 , which was particularly popular with German visitors.

At first it was called Casa Pagano . It was extended in 1845 and Ferdinand Gregorovius described the house in 1853 . In 1886 a model of the building was shown at the Berlin industrial exhibition.

The Pagano was particularly popular with German artists and writers of the 19th century. In Theodor Fontane's novel Der Stechlin , the protagonist Armgard mentions this fact and says that, with all due respect for art, there are too many artists there and that they would prefer to stay elsewhere. In fact, among others, the painters August Kopisch and Ernst Fries , who explored the Blue Grotto together with Giuseppe and Michele Pagano, Carl Blechen , Carl Götzloff , Joseph von Führich and Heinz Hoffmeister , who also made a large part of the wall paintings, as well as the poets Wilhelm Waiblinger , August von Platen and Joseph Victor von Scheffel as guests at the Pagano; likewise Fontane himself in 1874 and Gerhart Hauptmann in 1883. Wilhelm Jensen also mentions Pagano in his story Gradiva as a popular tourist area.

“Pagano, preferred by Germans since ancient times, with various artist memories and a beautiful palm tree in the garden, mostly praised for simple demands. Pension with wine including light and service 6, for stays of less than three days 7 fr. "

The building is located in Via Vittorio Emanuele 39. It was converted and is now called Hotel La Palma . In the immediate vicinity was the restaurant Zum Kater Hiddigeigei .