This article deals with a Czech part of the municipality of Halže. For the Austrian composer see Peter Branka . 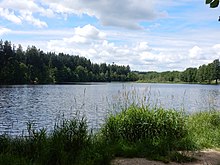 Branka (German: Galtenhof ) is a district of the municipality Halže in Okres Tachov , Czech Republic . The place is west of the town of Tachov (Tachau) in the Upper Palatinate Forest (Český les) on the Mies , near the border crossing to the Federal Republic of Germany in the town of Bärnau (Bavaria).

Galtenhof emerged after the Thirty Years' War in the border forest west of the city of Tachau , together with other scattered settlements, such as Ringelberg. The first "Waldhäusl" settlements came into being during the reign of Tachau under Baron Johann Philipp Husmann , but the actual settlement of the place Galtenhof only began after his death, around 1664. The place was grouped around the 8-hectare "Irlweiher" ( = Erlenweiher), Czech: Olšový rybník, and is recorded in the Theresian cadastre from 1713 as "Waldhäusler Galtenhoff Ihrl Weyher". At that time the place consisted of 9 houses.

Galtenhof belonged to the former Austrian monarchy under the rule of the Habsburgs. The border with Bavaria ran a few kilometers from the village in the west. It stayed that way even after the fall of the Austrian Empire in 1918 and the establishment of the first Czech Republic.

The pastoral care for the residents was initially carried out from Tachau. After the dissolution of the Paulaner monastery in Heiligen bei Tachau by Emperor Josef II, a separate parish was created in Hals for the former western part of the Tachau parish due to an imperial decree of February 15, 1787, to which, apart from Hals, the villages of Galtenhof and Ringelberg were ultimately added and Planner Brand belonged.

A new school house (No. 90) was built in 1890. Apart from the school and house no. 9, the Galtenhof community had no real estate worth mentioning.

Only two farmers with more than 5 ha and 43 “ cottagers ” who owned between 2 and 5 ha were active in agriculture . Small farmers were often dependent on a second income. for example as a forest worker, in the haulage or as a factory worker in the various companies in Galtenhof, for example in the mother-of-pearl or wood mold factories. Up to 150 workers and home workers who worked for the Adler mother-of-pearl button factory in Galtenhof processed three mother-of-pearl wagons a month . At the beginning of the 1930s synthetic resin and galalith were used as materials, later the company switched to woodworking. In the founding year of 1898, the company employed six workers, in 1905 it had 150 and in the 1930s up to 220 employees.

After the Munich Agreement , the place was added to the German Empire and until 1945 belonged to the Tachau district .

The Second World War ended for the population with the invasion of American troops, who moved on to Ringelberg and Hals. In the autumn of 1946, all of the forcibly evacuated Germans had left the village.

After the war, the municipality lost its independence and became part of Halže . In 1991 there were 42 people in Branka. In 2001 the village consisted of 22 houses and 51 inhabitants.

The district of Branka includes the cadastral districts of Branka u Tachova and Pavlův Studenec 3.