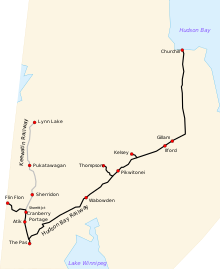 The Hudson Bay Railway (HBRY) is a Canadian railroad company based in Manitoba . It has been owned by the Arctic Gateway Group since 2018. The route network has a length of over 1,300 kilometers. The starting point of the railway line is The Pas , a small town around 630 km north of Winnipeg . In terms of infrastructure, the route is important for residents and industry in the otherwise difficult-to-reach regions of northern Manitoba. The line was built after the First World War in order to open up Hudson Bay and direct goods traffic and immigrant flows into the heart of Canada.

The line has a branch to Churchill and one to Flin Flon . The HBRY is also particularly important for the city of Churchill because it cannot be reached by car. It is also used to transport goods to and from Manitoba's only port in Churchill.

After a bridge over the Saskatchewan River had been completed between 1910 and 1911 , the Canadian Northern Railway (CNoR) built the route northwards in several sections. When the CNoR went bankrupt in 1918, the Canadian National Railway (CNR) was founded, which took over the construction on behalf of the federal government.

Political obstacles, financial difficulties, the enormous engineering challenges caused by the temporary thawing of the permafrost and recurring rock outcrops on the Canadian shield all led to inevitable delays in the progress of construction. Although explorations were carried out for both ports on Hudson Bay, Churchill and Nelson , a decision was made in 1926 to build the railway to Churchill. The connection was completed on March 29, 1929. In 1928 the CNR built the branch line from The Pas to Flin Flon.

The track is flooded every year during the spring thaw.

In 1997 the Omnitrax group acquired the railway line from the Canadian National Railway .

In May 2017, the train service between Gillam and Churchill was interrupted indefinitely due to undermining. Omnitrax was unable to carry out the reconstruction of the route. After lengthy negotiations, in which the Canadian Ministry of Transport was also involved, the route (together with parts of the Port of Churchill) was sold to the Arctic Gateway Group (joint venture of the investment company Fairfax Financial , the food manufacturer AGT Food and Ingredients and Missinippi Rail ) in August 2018 Limited Partnership, an association of First Nation and municipalities).

After the repairs have been completed, freight trains have been running to Churchill again since November 2018. VIA Rail resumed passenger traffic on December 2, 2018.

The Canadian passenger transport company VIA Rail operates the route once a week with a long-distance train from Gillam to Winnipeg and back, as well as once a week between The Pas and Gillam and once between Thompson and Gillam. The branch line to Thompson is also served by the trips to and from Winnipeg and The Pas, with several hours stopover in Thompson.