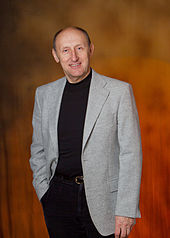 Ivan Sivec (born May 23, 1949 in Moste pri Komendi near Ljubljana ) is a Slovenian poet and writer .

Ivan Sivec was born on May 23, 1949 in Oberkrain . Even as a child he had shown creative talent. He has often appeared on poetry recitations and plays and, while still at school, had written various texts for children's magazines and regional newspapers. In his youth he had developed a fondness for Slovenian customs and traditions, many of which his father Andrej had passed on to him. He collected these and later published them in publications.

In 1967 he trained as an electrical engineer at the Technical Middle School in Ljubljana . He then studied Slavic Studies at the Philosophical Faculty in Ljubljana, graduating in 1978. During his student years he had already written fairy tales , humoresque and feature articles as well as various articles, including lengthy reports , for the national broadcaster Radio Slovenia, where he also wrote found his first job as a technician. As a journalist and editor he worked for the national radio station until he retired in 2005.

In 2002 he defended his master's thesis entitled The Phenomenon of the Ensemble of the Avsenik Brothers at the Faculty of Philosophy in Ljubljana, and thus obtained his master's degree in ethnology .

Ivan Sivec has written over 127 books in different genres and for different age groups. He has received numerous prizes and awards for his work.

As a poet, he also writes lyrics. He wrote more than 2500 texts for popular and popular music . His lyrics are interpreted by many Slovenian ensembles and musicians, including the famous ensembles of the brothers Avsenik , Slak, Mihelič, the Alpenoberkrainern and many others.

He wrote two extensive monographs on the development of popular music on Slovenian soil. In addition to the one in Slovenian, he had also published several lyric collections. In the monograph Slavko Avsenik and the Original Oberkrainer: A European Music Phenomenon from Oberkrainer he devoted himself to the biography of the brothers Vilko Ovsenik and Slavko Avsenik. The book shows the first beginnings of the ensemble's musical path and traces its development up to its official dissolution.

Only a handful of books have been translated into German so far, the best known is his biography of the folk musician Slavko Avsenik der Original Oberkrainer. In 2015 his first novel was also published in English: The X Factor.