The Jewish Academy is a Jewish educational institution under construction in Frankfurt am Main . The client is the Central Council of Jews in Germany . It will be the first Jewish institution of its kind of supraregional importance since the Shoah .

The impetus for the institution was the further development of the education department of the Central Council founded on the initiative of Dieter Graumann in 2012, which will be integrated into the academy. The Central Council also places them in the tradition of the Free Jewish Teaching House , which was founded in the early 1920s and dissolved by the National Socialists .

The two-stage multiple contract tendered for was won in autumn 2018 by the Frankfurt office of Turkali Architects , led by Zvonko Turkali , who was then also entrusted with the implementation planning. The building permit was granted at the end of December 2019. In September 2020, the purchase agreement for the property was signed by the Central Council of Jews and the city's own ABG Frankfurt Holding . The symbolic groundbreaking ceremony for the building took place on September 2, 2021 in the presence of Josef Schuster , President of the Central Council of Jews in Germany, the State Secretary in the Federal Ministry of the Interior Markus Kerber and the Hessian Prime Minister Volker Bouffier . The actual start of construction is planned for the end of 2021, the first tenders are already running. The academy is expected to be completed in 2023 and to start operations in 2024.

The future academy management was entrusted to Professor Doron Kiesel , Scientific Director of the Education Department of the Central Council, and Sabena Donath, Co-Head of the Education Department, who developed the content concept. According to the Central Council, the academy should have a supraregional and broad impact, not only convey knowledge, but also be a place for social discussion and think tank : “It should be an intellectual center and point of attraction for Jews from Germany and Europe as well as for members of others Religious communities are active that are interested in Jewish, intercultural, interreligious or universal issues. The Jewish Academy will take up, initiate or problematize public discourses and thus give the Jewish voice in Germany a recognizable profile. "

The main topics should be:

The Catholic Academy Rabanus Maurus in Frankfurt provided essential consulting services with regard to finances, conception, personnel and the program of the Jewish Academy. 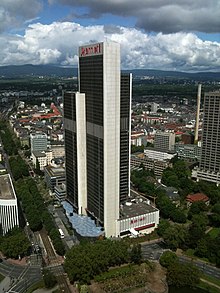 Aerial view of the area of ​​the Jewish Academy between the Marriott hotel tower (center) and the AfE tower (right at the edge of the picture, cropped), which has now been replaced by the One Forty West high-rise ; the building with the red roof is Senckenberganlage 9–11, to the left of it is the Tibet House (photo from 2010)

The academy is being built in the Westend district , at the southern tip of the culture campus that is being built on the previous Bockenheim campus . The area lies in a gusset at the acute-angled confluence of Georg-Voigt-Straße with Senckenberganlage. Another cultural institute, the so-called Tibet House Germany, is located in the immediate vicinity to the west. North of the academy is the One Forty West skyscraper . Adjacent to the south, on the opposite side of Georg-Voigt-Strasse, is the Marriott Frankfurt hotel high-rise - once the tallest hotel building in Germany - and behind it the Frankfurt exhibition center . In the east, the Senckenberganlage, part of the Frankfurter Alleenring , forms the border to the Westend district .

The former professor's villa at Senckenberganlage 9–11 (2012); the new building is added on an open space to the left. In the background is the Georg-Voigt-Straße 15 office tower, today the “Blue Horizon” residential tower.

Before the Central Council's intention to build, offices were to be built on the corner plot based on a design by the Frankfurt office of Albert Speer & Partner based on the dimensions and facade design of the existing houses .

The design by the architectural office Turkali for the Jewish Academy, on the other hand, is much larger and in its striking modern design with sober concrete and wide and high ribbon windows contrasts strongly with the neighboring former professors' houses from the founding time of the Goethe University, which are listed as an ensemble . The facade of the four-story new building basically follows the course of the two adjacent streets in a shape that varies from floor to floor. The partially cantilevered façades on the upper floors lead to a heavily capped top of the building at the meeting point of the streets. This front is emphasized in the middle floors by two superimposed window cutouts to the event hall behind and on the top floor by a loggia , which opens up a clear view to the south over the Ludwig-Erhard-Anlage to the exhibition tower .

A neighboring semi-detached house at Senckenberganlage 9–11, built in 1914 in the neoclassical style as a professor's villa and later temporarily the seat of the “Institute for Didactics of Mathematics”, is integrated into the overall concept by being connected to the new building by a glazed, single-storey structure . The connecting building serves as the main entrance and common foyer.

In the new building, an event hall with a height of up to 5.5 meters for around 200 people is planned by spanning the first to the second floor, an exhibition room, multifunctional and seminar rooms and a dining room in the basement. A spiral staircase leads to a large roof terrace. The old villa is being renovated and rebuilt in such a way that there is space for a café, meeting rooms, the academy administration and a small library. The structural engineering is done by the Frankfurt engineering office BS Schwarzbart.

The total costs were originally estimated at 15.5 million euros. In 2018 they had already risen to 21 million, of which 7 million were to be taken over by the federal government, 3 million by the state of Hesse and 4.5 million by the city of Frankfurt am Main. In 2021, a further increase in costs to 34.5 million euros was communicated. The Federal Republic of Germany bears 16 million, the State of Hesse 7 million, the City of Frankfurt 5 million, the rest is taken over by the Central Council.