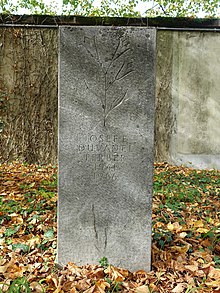 Grave, cemetery on the Hörnli

Duvanel studied from 1957 to 1958 at the Basel School of Applied Arts . There he was a student of Martin Alfred Christ. He then attended the Academy of Fine Arts in Geneva and from 1967 to 1974 the Paris Académie de la Grande Chaumière . From 1959 he worked as a painter and draftsman. Among other things, he created nudes, still lifes, landscapes and figure pictures. He often chose the subjects for his pictures from the area of ​​fairy tales and legends, circus and puppet theater. In addition to various galleries, he exhibited in 1962 in the Museum of Fine Arts in Neuchâtel , whose collection includes works by him. Duvanel also worked as a pianist, graphic artist and illustrator. He was married to Adelheid Duvanel from 1962 to 1981 and was friends with the painter Ferenc Jánossy. In 1986 he died by suicide .