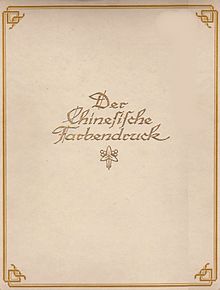 Binding of a monograph by Kurth, 1922

Julius Kurth was the son of the Rector Julius Kurth and Emma Marie Clausnitzer. He attended the Berlin Gymnasium at the Gray Monastery . From 1890 he studied Protestant theology at Berlin University . 1886 graduated from the Philosophical Faculty of Heidelberg University.

From January to March 1897 he made a trip to the Orient. As a scholarship holder of the German Archaeological Institute , 1897–98 trips took him to Jerusalem, Constantinople, Italy and Greece. On January 12, 1900, he married Elisabeth Heise from Berlin. After his ordination on March 31, 1901, he worked as city vicar in Berlin.

From 1910 until his retirement on June 1, 1935, he was pastor at the Taborkirche in Berlin-Hohenschönhausen .

His extensive collections of Egyptian, Near Eastern and ancient objects, cuneiform texts and papyri were loaned to the Archaeological Museum of the Martin Luther University Halle-Wittenberg in 1950. In 1992 the heirs donated the Kurth collections to the museum.

From May 5, 2017 to November 5, 2017, an exhibition on the life and work of Kurth took place under the title “The Radiance of Knowledge and Belief” in the Lichtenberg Museum in the Stadthaus, Berlin.