Grave III with the mock grave above

On the right bank of the Shkumbin River , at 795  m above sea level. A. high hill, lie the remains of the ancient city of Pelion and its necropolis . The Roman Via Egnatia led past her towards Thessaloniki .

The earliest settlement of the place took place in the Neolithic and culminated in an urban development under the Illyrian tribe of the Encheleans in the later Iron Age and in the Roman Empire . From the 4th - 1st century BC The city was probably a royal seat and thus also an important political and economic center.

From 1969 to 1972 excavations took place under the direction of Neritan Ceka .

The city has five layers of settlement. Selca I to III belong to the protourban phase and are divided into: late Neolithic , early Bronze Age and late Bronze Age, all represented by different ceramic forms. From the Iron Age one can speak of a permanent settlement.

Around 570/550 BC The town of Selca IV slowly emerged in the 3rd century BC , which is represented by traces of burned huts, ceramics, local turntable goods and Ionic and Corinthian imported goods in the lower horizon. In the upper horizon one found local, red-brown painted ceramics, turntable goods with two handles as well as Ionic and Attic goods. The local ceramic manufacturers were particularly fond of imitating Greek models. The settlement expanded to six hectares and reached in its main phase (3rd to 1st century BC) a size of seven to eight hectares. Terraces were created to enable the terrain to be built on. In the 4th and 3rd centuries, the place was surrounded by a wall that only enclosed the acropolis, but not the populated terraces.

In Roman times, i.e. in the 2nd and 1st centuries BC A wall of rectangular stone blocks was built to protect a larger area. The place existed in late antiquity, from the 4th to the 6th century AD, but was reduced to two hectares of populated area. At that time, stones from the ancient Roman ashlar wall were used to build houses. Two construction horizons can be determined on the basis of coin finds. The first dates to the time of Valentinian I (364 - 375 AD), the second comes from the time of Justinian I (518 - 565 AD). Around 547/548 AD, the city, which had long since lost its economic and political importance, was conquered by the Slavs .

The terrace with the graves I - III

Grave I has a rectangular burial chamber and a kind of anteroom in front of it.

The grave itself measures 8.15 meters by 4 meters and is 2.40 meters high. A barrel vault with a height of 2.10 meters arches over the burial chamber. The system is carved into the rock and has two doors. Outside above the door there is a rain gutter and mortises. Four pilasters with capitals resembling the Ionic adorn the facade, where traces of painting can still be seen. The burial chamber, measuring 3 meters by 2.80 meters, is equipped with two one meter wide stone loungers on which the dead rested. This grave is based on the Macedonian monumental graves from the 2nd half of the 4th century. v. It is stripped of antiquity.

Grave II - theater grave (middle of the 3rd century BC)

It has a schola-like facility with two tiered rows of seats that could have been used for any death ceremonies. Below the level of the orchestra there is a shaft grave for urns, measuring 0.80 meters square. The cover plate to the chamber is missing. Perhaps the grave was once provided with a light roof structure. It is unique in its shape and is dated to the middle of the 3rd century.

Grave III - central grave (middle of the 3rd century BC)

This grave is divided on two levels. The upper level is a mock grave, the facade of which is 3 meters high and 6.4 meters long and imitates an Ionic portico. Eight pilasters, the capitals of which were made separately, adorn the entrance. To the left of it is a niche in which a relief with a bucranion and a helmet of the Pergoma type is carved. On the right side is the relief of an Illyrian-Macedonian shield. The floor of the mock grave was decorated with a floor mosaic. The burial chamber was under the floor. It measures 2.72 meters by 2.77 meters and has a 1.85 meter high barrel vault. Two sarcophagi were found in the chamber. The 10 body or urn burials within the chamber belong to a second burial period. They date to the last decades of the 3rd century and contain a lot of grave goods. One suspects the burial place of a rich family (princely family), which died out within a short period of time. Among the grave goods are gold earrings, chains, needles, rings, all of the Hellenistic type, a belt fitting made of iron with silver decoration depicting a battle scene, armor, lance tips, spear tips and 30 ceramic vessels.

Grave IV (2nd half of the 3rd century BC)

Grave IV consists of a 70-meter-long facade carved into the stone, which is 5 meters high, and a burial chamber on the south side of the facade. This chamber is decorated with a temple-like entrance with two pilasters. It measures 3.50 meters by 3.10 meters and is covered with a barrel vault. The walls were decorated with frescoes. In the chamber there is a stone slab sarcophagus, old robbed. The grave dates from the 2nd half of the 3rd century BC. In the long outer facade, seven niches are carved into the rock, some with inscriptions that, according to the excavators, could name the builder or the supervisor of the work. They date from the 1st century BC. Chr. 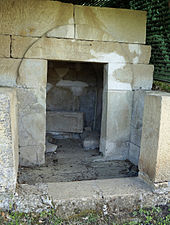 The last grave has the shape of a Macedonian chamber grave and consists of an antechamber and an actual burial chamber, both barrel-covered and built in a square construction. A stone slab with a relief serves as a false door to the burial chamber. In the chamber itself are the remains of three clinic sarcophagi, which were built from upright stone blocks. They were primarily used for body burials. Later urns and grave goods were also placed in the sarcophagi. The grave is old robbed.

During excavations, roof structures were sometimes attached over the graves to protect them from weathering. It has already been warned that the cultural monument is threatened with destruction because the state has not done anything to protect and maintain it for years. Restoration work was announced in 2018.

Because of its remoteness, the place Selca and thus the graves were hardly accessible for a long time and were therefore hardly visited by tourists. Today, a mostly asphalt road, which leaves the SH 3 at Përrenjas at the foot of the Qafë Thana pass , leads to the hill above the village. There are around 15 kilometers from Përrenjas on small back roads to the south. But visitors are still very rare. The facility can be visited without admission.

Commons : Tombs of the Kings of Selca e Poshtme  - Collection of images, videos and audio files