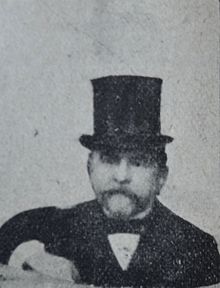 Karl Wilhelm Mandel (born April 22, 1851 in Schwabach , † December 24, 1924 in Ansbach ) was an administrative lawyer and Under-Secretary of State for Alsace-Lorraine .

Karl Wilhelm Mandel attended high school in Ansbach and studied law in Munich and Leipzig. In 1869 he became a member of the Isaria Corps . As a student he took part in the Franco-German War .

From 1876 he was active in the service of the realm of Alsace-Lorraine . First as a justice of the peace in Albesdorf , then as a public prosecutor in Saargemünd and from 1880 in the Ministry of the Interior in Strasbourg. From 1883 to 1885 he was district director in the Erstein district , ministerial advisor in 1892 and ministerial director in 1905. From 1906 to 1914 he worked as Undersecretary for the Interior in the Ministry for Alsace-Lorraine . In terms of content, this corresponds to an interior minister in one of the other German states. In 1914 he left office after the Zabern affair . He last lived in Ansbach until his death in 1924 .