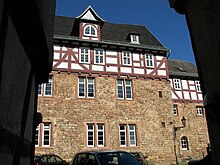 The former Kilian's Chapel was built between 1180 and 1200 in the Romanesque style as a market chapel for the parish of Sankt Martin zu Oberweimar . This makes it the oldest preserved building in Marburg's core city, located at the shoe market on Reitgasse in Marburg's Upper Town , not far from the Old University. On April 16, 1227, Marburg became an independent parish, but Kilian was not the main parish church of the city that grew in the 13th century. After the Landgraves of Hesse donated the parish of Marburg to the Teutonic Order in 1243, the city acquired the rights to the parish in the 14th century.

Until the Reformation was introduced in Hesse in 1526, services were held in Kilian. After it was decided that preaching should only take place in one church in each city, all churches in Marburg were initially empty except for the parish church of St. Marien (now the Lutheran parish church ) and the Elisabeth Church, which belongs to the Teutonic Order . After July 18, 1527, the city ​​scales were housed in Kilian . The shoemakers leased the chapel of the chapel as a guild room on December 22, 1535, and the nave became a bakery from 1545. At times the Kilian was even used as a pigsty, from 1671 at the latest as a school and orphanage. From 1910 the city administration and the city police used the building, in the Third Reich also the Gestapo . From 1969 to around 2010/11 the German Green Cross eV (DGK) had its permanent seat in Kilian in Marburg. After acquisition by the municipal housing company GeWoBau, the building has been renovated since the beginning of 2013 and has been used for student accommodation since October 2013.

In 1452, stones from the demolished synagogue were used to build a new wall around the Kilianskirchhof. From 1552 to 1554 the east tower was torn down and the stones were used to rebuild the collapsed Weidenhäuser Bridge. After the gable and the vault were demolished in 1560, the Kilian received a half-timbered upper floor in 1580/81, which was called the shoemaker's room. The building was rebuilt again in 1872/73 and extensively renovated in 1964. What is remarkable for a building from the late 12th century is that the builder immortalized himself on the arch of the main entrance with the words "Godescalcus me fecit". Originally there was a cemetery in the square around the church. However, after the shoemaker's guild moved into Kilian, the square became a shoe market.