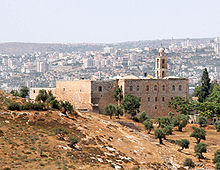 The monastery of Mar Elias (Hebrew מר אליאס, Saint Elias ) is a Greek Orthodox monastery in the West Bank (Israel). It is on a main road from Jerusalem to Bethlehem . and was founded in the 6th century. It is one of the oldest continuously used Christian monasteries.

The monastery was probably founded in the 6th century at the place where the prophet Elias is said to have stopped in the Old Testament while fleeing from Jezebel ( 1st Kings 19  EU ). In the vicinity of the monastery, the wise men are said to have seen the star of Bethlehem ( Mt 2,1.9  EU ) again.

Mar Elias Monastery, from the street side

During the Arab-Israeli wars from 1948 onwards, the monastery was at times a base for Arab and Jordanian units. It has been on the border between the Palestinian West Bank and Israel since 1967.