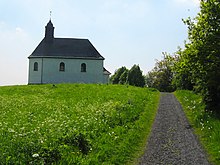 Badge at the entrance

The Wülfersberg monastery was a Premonstratensian monastery that existed from around 1140 to 1521 . It was in what is now the Neuwied district of Gladbach in northern Rhineland-Palatinate on the right bank of the Rhine . The Wülfersberg Chapel, which is well worth seeing, has remained.

The preserved monastery church, which was often only called Peterskirche in popular parlance, was next to St. Peter also St. Dedicated to the Virgin Mary and the Archangel Michael . The warlike turmoil of the Middle Ages and the associated costs, which could only be partially covered by the sale of the goods that were considered to be the basis of existence, ultimately led to the monastery being dissolved in 1521. The nuns still living there were relocated to other monasteries, and the goods fell to the mother monastery.

Around 1655 there were extensive restoration measures, which had been initiated by the then Rommersdorf abbot Petrus Dietrich (also Diederich). The church was reconciled again in October 1655 . From then on there was no more monastic life in Wülfersberg.

In the course of secularization , efforts by the Gladbach community were made in 1804 to use the stones from the Wülfersberg church to expand the village chapel, which had become too small. However, this suggestion was not accepted, so that the church can be used as a chapel again today, despite looting, agricultural use and temporary decay after the city of Neuwied acquired the site with the church and restored the church .