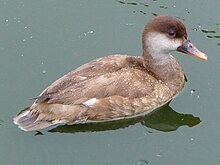 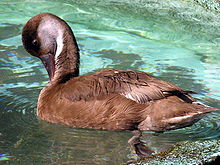 Female of the pochard duck cleaning herself

Resting drake of the pochard

Distribution areas of the pochard:

The pochard ( Netta rufina ) is a species of bird the size of a mallard from the family of ducks (Anatidae). It is one of the diving ducks and can stay under water for up to 30 seconds. The male is unmistakable in its magnificent dress with its fox-red head and carmine-red beak.

The breeding area of ​​the pochard is only closed in Central Asia. The European breeding area, on the other hand, is disjoint and has its focus in the western Mediterranean area. The island-like occurrences in Central Europe can also be attributed to the fact that the pochard did not colonize Central Europe until the 20th century. This species was therefore unknown to Carl von Linné . The scientific description of the species was first made by the Berlin-based doctor and naturalist Peter Simon Pallas , who undertook extensive research trips to Russia in the second half of the 18th century and discovered this species there.

The 45 to 55 cm large red-crested pochard weighs 800 to 1500 g and has a wingspan of up to 90 cm. The male has a very conspicuous, red-brown, thick head and a bright scarlet beak, which stands out sharply against the color of the head. The head, which is disproportionately large compared to the body, is additionally emphasized by a loose spring hood. The eyes are red. The chest, goiter, lower tail covers and the belly are black. The flanks are white and the back and wings are brown. In flight, the white leading edge of the wing and the wide white wing band are unmistakable. In the plain dress, the plumage of the males resembles that of the females. They can be distinguished from them by the higher-contrast head color and the pale color of the beaks compared to the magnificent dress, but still red throughout.

The female has brown plumage with the flanks and neck slightly lighter than the back. The skull is dark brown from the height of the eyes. The cheeks and the lower neck, on the other hand, are whitish gray or light gray. The beak is dark brown and has a light red band at the tip. The light gray cheeks as well as this red cross band at the tip of the beak are an essential distinguishing feature to distinguish the females of the pochard from the females of other duck species. In swimming females, the white under wing-coverts are also recognizable as a white spot near the tail.

The pochard can live up to seven years. The call of the males can be heard especially during the breeding season. It sounds something like a nasal Baet or fry and is often embedded in trills.

The closed breeding area of ​​the pochard extends from the steppe and semi-desert areas on the Black Sea to Mongolia. There are small, widely scattered breeding areas in the moderate climatic zone of Europe from the north of the Netherlands and the south of Denmark, the east of Poland to the foothills of the Alps as well as the Czech Republic, Slovakia and Croatia. Other disjoint breeding areas can be found on the Iberian Peninsula.

The pochard is a species of duck that breeds only rarely in Central Europe. Well-known breeding areas are Lake Constance, Lake Starnberg, the Ismaninger pond area and the Inn reservoirs. It also breeds on some lakes in the Netherlands, Schleswig-Holstein, Mecklenburg and in the South Moravian pond areas. She feels very comfortable in plant- rich still waters . The water depth and rich vegetation anchored in the muddy bottom are decisive for colonization with red-crested ducks.

The pochard is basically a very adaptable species that has expanded its range for a little more than 100 years. The wave of propagation began around 1894 from the Camargue . As early as 1910, red-crested pochards were breeding in La Dombes , an eastern French region. The pochard has been a breeding bird in Germany since 1920. In 1940 it had already reached Denmark and in 1942 the first breeding birds were observed in Holland. Italy was colonized relatively late by the piston duck. It has been breeding here since 1950. After phases of area expansion and an increase in the population in many areas of Europe, the red-crested pochard has been declining again in many areas since the 1970s. This applies in particular to the main European distribution areas Russia and Romania. After a low in the 1980s, however, there is now a slight increase in the population and a settlement of new areas. The first breeding pairs have settled in Belgium since 2000. A total of 420 to 540 breeding pairs brooded in Germany between 1998 and 2002, fifty to a hundred in Switzerland and 150 to 250 in Austria.

Red-tailed ducks have been breeding sporadically in Great Britain since 1937. However, these breeding birds are not attributed to the general tendency of this species to spread, but are considered to be the offspring of captive refugees .

The pochard is a migratory bird north of the 46th parallel, otherwise a partial or short-distance migrant. The wintering areas include the Mediterranean region, the Black Sea region as well as Egypt, the Middle East and India. Since the 1990s, many red-tailed ducks have been wintering on the waters of Central Europe, especially on Lake Neuchâtel and Lake Lucerne and on Lake Constance . Several 1000 hibernating individuals are regularly counted on the latter.

A moulting of the males can already be seen from June. Smaller moulting areas can be found in the southwest of the Baltic Sea, in the Netherlands and larger ones on Lake Constance, for example.

The pochard duck feeds mainly on aquatic plants and algae . The most important food crops are chandelier algae and spawning herbs . You will be taken up diving or scouring. With the parts of the plant, the red-crested pochard also takes on snails, aquatic insect larvae and other invertebrates attached to them. However, their share in the total diet is only small.

The foraging takes place mainly in the shallow water area. But it can also take up food in a water zone up to four meters. To search for food, the red-crested pochard dips with a plunge-like movement. In shallow water zones, however, it also searches for food by searching. 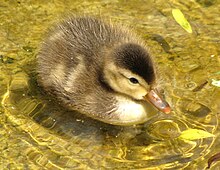 Chick of the pochard 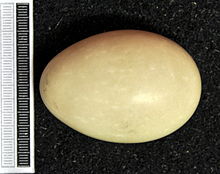 The pochard becomes sexually mature after one year. The courtship begins in autumn and takes place in the winter quarters with increasing intensity. The courtship usually takes place around noon. In autumn and winter, group courtship is initially characteristic. It is shown in full intensity especially when at least five drakes have gathered. The more ducks have mated and the stronger the pairing is, the more this social show turns into a single show. The pochard shows “ courtship feeding ”, which is very rare in duck birds. Drakes appear with parts of plants in their beak and offer them to the female. Occasionally, females actually eat from these green plants offered in this way. It is not yet known whether red pochard in the wild are monogamous. Long-term marriage has so far been established in captive red-crested pochards.

Several weeks can pass between arrival in the breeding area and building the nest. The nest is created in the dense vegetation near the shore . It consists of a substructure made of dry plant parts, which rises in a cone shape above the nest hollow. The female lays six to twelve cream-colored to light green eggs . Clutches with 21 eggs have also been found. However, these may have been used by two females. With red-crested ducks it is more common than with other duck species that several females use one nest. Eggs are also laid in the nests of other species of ducks. This behavior is promoted by the fact that red-crested ducks only have a slightly pronounced territorial behavior during the breeding season. However, a clutch with slightly differently colored eggs is no indication that the clutch is from two females. The clutch of just one female also shows a certain variability in egg color.

In Central Europe, egg-laying begins in mid-April at the earliest. It is more common to start breeding in May. Incubation begins when the last or penultimate egg is deposited. The incubation period is on average 26 days. The female breeds alone. The male remains near the nest and takes over the supervision of the nest during the breeding breaks. This behavior is not very common in ducks. As a rule, the drake does not take an active role during the breeding or rearing of the young.

The young fled the nest and fledged after 45 to 50 days. The European population is estimated at around 15,000 breeding pairs.

The total population of the poched-crested duck was put at 350,000 to 440,000 animals by the IUCN according to data from 2002 . The species is considered "not endangered".

There are no known subspecies of the pochard. The species is considered to be monotypical .