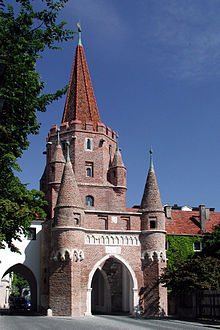 The Kreuztor , built in 1385 , is the landmark of the city of Ingolstadt . The name of the gate is derived from the former Leper House to the Holy Cross, located west of the city, which was destroyed in the Schmalkaldic War in 1546 .

The seven- tower cross gate is part of the second Ingolstadt city ​​wall, which was built in 1363 . It is the only one of the original four main gates Feldkirchnertor , Hardertor , Kreuztor and Donautor to be preserved. In addition, the original Feldkirchner Tor still exists, which also belongs to this second fortification phase. It was integrated into the castle area when the New Palace was expanded.

An octagonal structure with four oriels is set on the square gate tower, which ends with a pointed helmet . On the side of the building out of town, two stand bay windows delimit the archway.