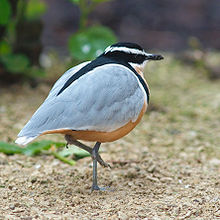 The crocodile guardian ( Pluvianus aegyptius ) is an African species of bird from the order of the plover-like (Charadriiformes). It gets its name from its supposed ability to look for food in the mouths of crocodiles. The IUCN estimates the total number of crocodile watchdogs at 40,000 to 85,000 animals and classifies them as “not endangered”.

Crocodile guards are around 19 to 21 centimeters long and have plumage that is so characteristic in its color distribution that they cannot be confused with any other species. There is no sexual dimorphism .

The upper side of the body is predominantly pale blue-gray, the lower side of the body is yellowish-white with a sharply defined black chest band. The parting and the cheek area are black. A white narrow stripe above the eyes runs from the base of the beak to the nape of the neck. Starting from the neck, a black-metallic shimmering field stretches across the middle of the back. The tail is light gray and has a broad white end band.

Crocodile guards run very quickly and jerkily on the ground. They often stop and pause or start pawing for food. The flight is fast with nervous flapping of the wings. They mostly fly low over water and sand. They are often extremely trusting towards people.

Crocodile watchers live in central and southern Africa , from Mauritania and southern Sudan to Angola and Uganda . In Egypt , the crocodile guardian became extinct in the early 20th century. The disappearance of the species there is mainly attributed to the construction of the Aswan Dam. In West Africa, it is a common bird on the sandbanks of all major river systems. The species is most numerous in the Sahel zone, where it is often found in close proximity to human settlements. Thanks to his familiarity, the crocodile watcher can also be found on stretches of river that are densely populated by humans.

The crocodile watchman is a partial puller whose pulling movements are triggered by changes in the water level. For example, it is missing in the Niger Delta in Mali when the water level is at its highest. During this time, its preferred abode, namely sandbanks in the water, are usually flooded.

They live in pairs or small groups on the banks of rivers and lakes, their diet consists of insects and mollusks . Since Herodotus there have been reports that birds should stay in the mouths of crocodiles to clean them. They would rid the crocodiles of parasites and food residues, so the crocodiles let them go. Thus the birds would have a secure food source and the crocodiles would have good dental and gum care. According to ornithologist Gordon Maclean, however, there are no reliable observations of this behavior; he considers these reports to be legends.

Crocodile guards lay their two to three eggs in hollows on sandbanks in rivers and lakes. The clutch is covered with warm sand. Sometimes the parents regulate the temperature by sitting on it with a water-soaked stomach to cool it down. The chicks flee nests and can run as soon as they hatch. If there is danger, the parents temporarily bury them in the sand.

There are two subspecies: