The kuenstlerhaus43 refers to both an independent family-owned theater and the building in which it is located. The theater was founded in 2005 by Susanne Müller and Wolfgang Vielsack in Wiesbaden . In the presentation, it regularly and deliberately breaks the usual separation of stage and auditorium. The kuenstlerhaus43 is the initiator and organizer of the Wiesbaden Castle Festival. 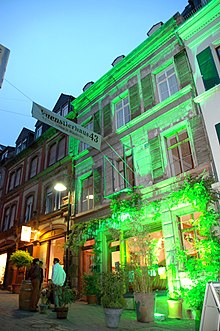 The kuenstlerhaus43 has been practicing an unusual form of theater since it was founded. Most productions have in common that no stage is used in the classical sense. This was originally due to a lack of space when the performance of Romeo & Juliet had to be relocated to kuenstlerhaus43 at short notice in 2006. Since there was no space in the old workers' house for a classic structure with a stage separate from the auditorium, the idea of ​​a staging without this limit arose. Actors and guests met and interacted with each other, which meant a sharp break in the fourth wall . The success of this production influenced all subsequent productions. They all followed the principle of keeping the separation between artists and audience as small as possible.

Two other recurring patterns in the productions are the modification of classical texts and improvisation. In addition to its own productions, the kuenstlerhaus43 often falls back on well-known works, although it regularly relocates the story to historic Wiesbaden. This connection to the home of the viewer further reduces the distance between the presentation and the viewer. The strong use of improvisation in the performances is made necessary by the sometimes direct contact with the audience.

The kuenstlerhaus43 building is located in Wiesbaden between the city center and the Bergkirchenviertel. It was built in the 19th century and is one of the oldest houses in the former working-class district.

In the past, theater productions by the kuenstlerhaus43 took place in other locations as well. So was z. Played in Schloss Johannisberg , in Hofgut Adamstal and between 2011 and 2012 in a vacant lot on Kleine Schwalbacher Straße in Wiesbaden.

In 2014 the kuenstlerhaus43 launched the Wiesbaden Castle Festival. The open-air theater at the historic Sonnenberg Castle attracted 1,500 visitors over six days. In 2015 the second festival will take place over three weeks. In both 2014 and 2015 a. Nick Benjamin on stage.

2015 : Robber Hotzenplotz ( Otfried Preußler ), The Servant of Two Masters (based on Carlo Goldoni ), Midsummer Night's Dream (based on Shakespeare )

2014 : The Servant of Two Masters (based on Carlo Goldoni)

Selection of some premieres

2006 : Rien ne va plus (city thriller; commissioned by the cultural office of the state capital Wiesbaden )

2005 : From Kaiserwetter to Donnerwetter (historical city tour; commissioned by the cultural institutions of the state capital Wiesbaden)