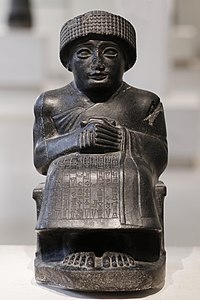 Lagaš has been around since the 4th millennium BC. Settled. It reached its greatest importance in the second half of the 3rd millennium BC. BC Lagaš was a city-state that ruled several surrounding places such as Girsu or Nina .

The middle of the 3rd millennium BC Chr. Was characterized by constant conflicts with the neighboring city of Umma , which were triggered by disputes over a border. After Lagaš was initially able to achieve military successes against Umma under Eanatum , Lagaš was finally destroyed by Lugalzagisi by Umma and Uruk a few decades later.

After the decline of the Akkad Empire and a period of little importance, Lagaš rose to become the dominant power in Sumer under the Second Dynasty - especially under Gudea . At that time the main town of Lagaš was no longer the city of Lagaš, but Girsu (today Telloh ), where the god Ningirsu was worshiped.

The Lagaš area comprised around 160,000 hectares, 17 larger cities, 8 regional capitals and many villages, around 40 of which are known by name. From inscriptions and temples it can be deduced that Eridu , Ur , Nippur , Adab , Uruk and Bad-tibira probably also recognized the suzerainty of Lagaš. Since this influence was acquired less through acts of war than through trade contracts, a period of prosperity followed. The infrastructure was improved, canals and drainage systems were built, but the arts also benefited.

The hegemony of Lagaš came to an end with the rise of the III. Dynasty of Ur .