The Westend Gate is an office and hotel high-rise in the Westend of Frankfurt am Main . It is located at Hamburger Allee 2-4, opposite the main entrance to the Frankfurt Trade Fair . The 159 meter high building was erected in 1976 and has 47  floors . The leading architects were Siegfried Hoyer and Richard Heil. The usable area of ​​the house is 55,400 square meters.

After its opening, it was for a short time the tallest skyscraper in Germany and at the same time the first skyscraper in the country. It consists of an office wing that was marketed as the Plaza Office Center and a hotel wing that was once run as the Plaza Hotel . The Marriott hotel group moved into the building in 1989 and today occupies the conference floor on the fifth floor and floors 26 to 44 in addition to the reception on the ground floor and the ballroom on the first floor.

In the 1990s, the entrance area was given a postmodern design with a large historicizing glass dome and other additions that did not fit the overall picture architecturally. The building was extensively renovated between October 2008 and March 2009, including the removal of the extensions. The office space has been available again under the new name Westend Gate since the second quarter of 2009.

In November 2008, almost a third of the total area or almost 46 percent of the office space (around 17,500 square meters) was vacant. From 1988 to February 2012 the building belonged to DEGI, an open real estate fund . From 1998 to 2007 DEGI was a Dresdner Bank subsidiary; today it belongs to the Swedish Aberdeen Property Investors Holding from Stockholm, which in turn belongs to the British Aberdeen Asset Management .

The Aparthotel Adagio Frankfurt City Messe, which specializes in permanent guests, has been occupying floors 4 to 10 of the building with 172 apartments since September 2016. 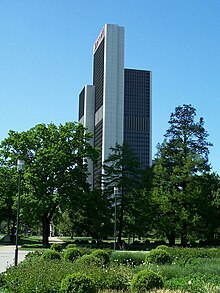