Landis + Gyr (formerly Landis & Gyr ), based in Zug, is a global provider of energy management solutions.

The company has been listed on the SIX Swiss Exchange since July 21, 2017 . The company is present in more than 30 countries on five continents and employs over 5,900 people. 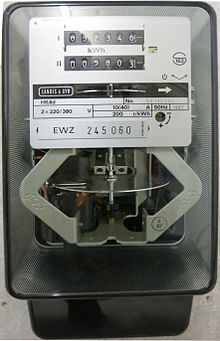 The company goes back to Richard Theiler and Adelrich Gyr, who founded the Electrotechnisches Institut Theiler & Co. in Zug in 1896 for the production of electricity meters , telephone inductors and phonographs. In 1904 Richard Theiler withdrew from the company. Engineer Heinrich Landis took over the business, which Karl Heinrich Gyr joined as a partner. As a direct result, the company, which then had 55 employees, was initially renamed Heinrich Landis, previously Theiler & Co and in 1905 Landis & Gyr .

With the strongly developing electrical industry and the increasing demand for electricity meters, the company experienced strong growth in the following years. This led to expansion into other European countries and the establishment of sales offices and manufacturing companies in Germany , Austria , France and Russia . Landis & Gyr was converted into a stock corporation in 1914, with over 500 employees now.

After the end of the First World War, the company expanded overseas and opened branches in the United States and Australia. As a result, international growth was also driven by takeovers. In 1924, Landis & Gyr employed 1,100 people at its headquarters in Zug. From the 1930s onwards, production was expanded to include other telemetry and telecontrol technology products. The establishment of a heat engineering laboratory in 1940 laid the foundation for what would later become the Building Control division, which has been known as Siemens Building Technology since 1998 .

In 1956 Andreas Brunner and Gottfried Straub took over management of the company from their father-in-law, Karl Heinrich Gyr. They reorganized the financing and accounting, expanded the activities and opened the company to public shareholders. The annual turnover of the company, which is now traded on the Zurich Stock Exchange , has now reached 80 million francs. The number of employees was 7,800 and grew to 15,500 worldwide by 1976, over 5,000 of them in Zug. Sales reached a new high of 900 million francs. This is also thanks to the acquisition of Duncan Electronics in the USA, a company specializing in the development and manufacture of electricity meters for the American market.

From the mid-1970s, but especially after the resignation of Andreas Brunner and Gottfried Straub in 1984, economic difficulties made restructuring and redimensioning measures inevitable. In 1987, the heirs of Karl Heinrich Gyr finally sold their shares to the Swiss industrialist Stephan Schmidheiny , who sold his majority stake in 1995 to the Swiss Elektrowatt AG. In the year of the company's centenary, Landis & Gyr was integrated into Elektrowatt AG. The listing on the stock exchange was discontinued and the company lost its independence.

In 1995 the company achieved sales of 2.9 billion Swiss francs with 15,000 employees worldwide. In addition to the meter business and building technology for commercial and residential buildings, Landis & Gyr, through its subsidiary SODECO in Geneva, was the only provider in the public telephone business segment whose products could be used with coins and various card technologies. Another innovation that is used today in numerous official documents and banknotes - including the euro - is the Kinegram , an optical security feature . Both activities were sold shortly before the industrial activities of Elektrowatt were taken over by Siemens AG. The company archive of Landis & Gyr (1896–1998) is located in the archive for contemporary history at ETH Zurich.

In 1998 Siemens AG acquired the industrial activities of Elektrowatt AG and thus also the meter business run as Landis & Gyr Utilities. The new owner merged her own meter business with Landis & Gyr to form Siemens Metering AG . It employed around 6,500 people and had 24 factories around the world. Economic difficulties required extensive restructuring measures in the following years. As a result, various factories were closed and the workforce was cut to less than 4,000.

In 2002 Siemens AG decided to withdraw from the meter business and sold the company, now trading as Landis + Gyr again , to the American private equity company Kohlberg Kravis Roberts & Co (KKR). Two years later and after a successful turnaround, the Australian investment company Bayard Capital took over Landis + Gyr in its company portfolio in order to develop it into the market leader in smart metering and to bring it back on the stock exchange one day.

Bayard pursued a buy and build strategy for this. Between 2004 and 2011, Bayard invested $ 1.2 billion in a number of acquisitions to massively expand Landis + Gyr's portfolio, particularly in the area of ​​communications networks. Landis + Gyr thus set the pace for the entire meter industry, which developed from a product business to a solution business. In 2008 Bayard Capital became Landis + Gyr Holdings and relocated from Sydney to Zug.

Landis + Gyr Holdings decided to sell in the middle of preparations for an IPO. Toshiba Corporation (60%) and the Innovation Network Corporation of Japan (INCJ, 40%) acquired the shares in Landis + Gyr in 2011 for a price of 2.3 billion dollars in order to jointly develop the group as an independent growth platform.

In July 2017, Toshiba announced that it wanted to bring Landis + Gyr back to the Swiss stock exchange . The IPO on the SIX Swiss Exchange took place on July 21, 2017.

Today Landis + Gyr is the market leader in smart metering ( intelligent meter ). The company employs over 5,900 people in over 30 countries and at more than 70 locations. They support their customers - including the world's leading energy supply companies - in modernizing their meter infrastructure, in setting up intelligent power supply networks, so-called smart grids , and in managing energy better.

In addition, under the Gridstream® brand, the company offers customer-specific solutions for electricity, heat and gas that are adapted to supply networks. An open architecture enables their integration into new or existing system landscapes and can also include solutions from third parties.

The company divides this range of products and services for energy supply companies, service providers and end customers into