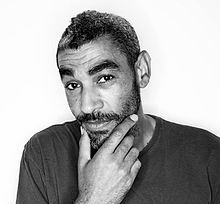 Leeroy Thornhill (born October 8, 1968 in Barking , England ) is a British musician , DJ and former dancer and live keyboardist for the British band The Prodigy . He released solo under the names Longman and Flightcrank and is currently active with Marten Hørger on the Smash Hifi project. He was born in Barking but grew up in Rayne near Braintree in Essex . Thornhill founded The Prodigy in 1990 with Keith Flint and Liam Howlett . The two meter tall dancer stood out there with his very individual dance style, with which he influenced the development of the so-called Melbourne Shuffle . In this context, he was also interviewed for the documentary Melbourne Shuffler .

In 2000 Thornhill left the band to devote himself to his solo projects. He released several EPs under the pseudonyms Longman and Flightcrank and founded the label Electric Tastebuds, which was nominated as the best newcomer label of the Breakspoll Awards in 2007. His greatest success came from working with the German DJ and producer Marten Hørger, with whom he founded the music project Smash Hifi. Several singles and remixes were released under this name, including for the German techno DJ Westbam . A music video was produced in October 2008 for “Everything U Need”. Directed by the Canadian Philip Carrer and the Canadian artist collective Bleeding Apple. Thornhill also plays internationally as a DJ.