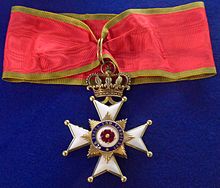 The Princely Lippe House Order was awarded on October 25, 1869 as the Princely Lippian Cross of Honor by the regents of the houses of Lippe and Schaumburg-Lippe , Prince Leopold III. by Lippe and Adolf I. Georg von Schaumburg-Lippe , donated as a common house order in order to be able to reward loyal services rendered to the country or the princely house. According to the statutes, he was one of the youngest of the house orders of the German royal houses.

Lippe house orders are divided into 4 classes and initially consisted of 3 classes and two medals.

The fourth grade was later introduced for war earnings.

There is also the Princely Lippian House Order, Officer's Cross with Swords

Depending on the class, the design differs in terms of material, size and weight. The princes (1st class) wore the crown and ribbon for the neck. The execution with oak leaves and for services in war with swords was awarded for particularly outstanding services .

From the houses of Lippe Detmold and Schaumburg-Lippe there are war merit and war honor crosses , war membership badges, service awards for years NCO, Lippische Rose, merit medal, rescue medal, Bertha medal and the Leopold medal with the crown and medals.

There is no doubt that the abbess order, donated by Count Simon August zur Lippe's eldest sister in 1778, served as a model for the emblem. This consists of a white enameled gold cross of St. John with the red, Lippe rose on a white background in the medallion. The ring around the medallion contains the slogan FOR LOYALTY AND MERIT in gold letters on a blue background . On the back there is the crowned golden L of the founder, Prince Leopold III , on red enamel . to lip.

The Cross of Honor was also awarded with swords for services in the war.

The medal was worn on a red ribbon with a gold border on both sides. Classes I and II were worn as a neck medal. The other classes decorated in the buttonhole or on the left side of the chest. The princes of both houses also wore a breast star of the same appearance.