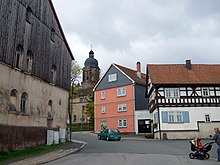 Directions for the section at Schmalkalden

Information board on the Luther Trail in Thuringia

The path is suitable for those interested in cultural history and pilgrims . The route is partly based on the historic road on which Martin Luther traveled: Schmalkalden, Lutherplatz - Kleinsteinbach junction (4 km) - Großer Steinberg (3 km) - Brückenfelsen (2.5 km) - Nesselhofwiese (2.5 km ) - Alte Ausspanne am Rennsteig (1.5 km) - Lutherbrunnen (3.5 km). The distance is 17 kilometers, which can be covered in four to five hours. There are 443 meters uphill and 242 meters downhill. The highest point is 742 meters and the lowest is 299 meters. The path is sure-footed, but not barrier-free.

The Luther Trail recalls the route on which Martin Luther started his journey home to Wittenberg on February 26, 1537 after signing the Schmalkaldic Articles . Luther drove, accompanied by the Erfurt doctor Dr. Sturtz, in a car that Elector Johann Friedrich I of Saxony had given him.

Luther had already suffered from bladder and kidney problems in Schmalkalden. When he got near Tambach, he drank from the water of a well there and believed himself cured. The next morning in his quarters, the Electoral Geleithof in Tambach, he wrote to Philipp Melanchthon “ from Tambach, the place where I was blessed, because here is my Phanuel, where God appeared to me. "According to Ludwig Bechstein, he even felt called to graffiti: [...] in the Gasthaus zu Tambach he took a coal and wrote on the wall:" Tambach est mea Pniel "- the name of the place where Jacob wrestled with God -" ibi apparuit mihi dominus. ML ". It stood in that house for a long time [...] . To mark the anniversary of the Reformation in 1717, the Dambachsborn in Tammichgrund near Tambach - it is said to be the one from which Luther drank from, was renamed Lutherbrunnen . It is more likely, however, that the kidney stones loosened from the shaking of the car ride.

Today, the plaques with Luther's sayings put up next to the fountain and the Electoral Geleithof in Tambach commemorate Martin Luther.