View of the Malacañang Palace from the Pasig River

The Malacañang Palace ( Spanish Palacio de Malacañán or, as it is officially known, the Malacañan Palace ) is the official residence of the President of the Philippines . The palace is located on the north bank of the Pasig River in the state capital Manila . In the Filipino language it is referred to as Palasyo ng Malakanyang , but when speaking of the Malacañang Palace , one refers to the official residence and office of the President. The short form Malacañang is used again when referring to the office of the Philippine President or it is used in daily jargon or in the media. The term "Malacañang" is a metonymy that generally designates the Filipino presidency or that generally stands for the executive branch. The Malacañang Palace is shown on the back of the currently valid 20 peso note.

According to the official etymology from the 1930s, the name comes from the phrase "May lakan diyan" in the Tagalog language , which means "there is a nobleman there". This could be due to the fact that the Malacañang Palace was once the house of a wealthy Spanish merchant before it became the residence of the respective head of government. The Spaniards, for their part, claim that the name derives from the Mamalakaya , the fishermen who used to set their nets in the bend in the river where the palace now stands. Another source says that the name has its origin in the phrase "Ma-lakan-iyan" , which can be translated as "where the leader or the head resides". A more mundane claim is that the palace actually only got its name from the street on which it is located, the Calzada de Malacañang .

Wherever the name really comes from, the word Malacañang itself is indisputably of Filipino origin. The Spanish language avoids "-ng" in the end. The Spanish colonial rulers made “Malacañang” into “Malacañan”. The Americans , who ruled the Philippines from 1898 to 1946, adopted this form of the name, although the English language allows "-ng" at the end of the word. ', Which has remained a recognized English version of the palace name to this day. The omitted "g" at the end of the name was finally reintroduced into the name by the Philippine government during the presidency of Ramon Magsaysay in order to honor the historical roots of the palace.

Before the independence of New Spain , the Philippines was ruled by a Spanish captain general who, as subsequently the governor general of the Philippines, resided in Manila behind the walls of the Intramuro until an earthquake in 1869 completely destroyed the Palacio del Gobernador (governor's palace). At that time, the Malacañang Palace was still a summer house, originally built in 1802 by the Spanish aristocrat Don Luis Rocha. It was then acquired by a Spanish official and then became the property of the state. At that time it served temporarily as the residence of Governor General Rafael de Echague y Berminghan , the former governor of Puerto Rico . This was the first Spanish colonial head to live in the Malacañang Palace. Later it was expanded into an elaborately decorated Spanish colonial palace, equipped with arches, verandas, balconies, window grilles and sliding windows with panes made from Capiz shells.

After the Spanish-American War , the Philippines came under American rule and the Malacañang Palace became the residence of the American Governor General. In 1900, William Howard Taft became the first American civil governor to enter Malacañang. The palace was then expanded by adding an executive building to Governors General Francis Burton Harrison and Dwight Davis. After the establishment of the Commonwealth of the Philippines on November 15, 1935, the complex was taken over by Manuel Quezon , who was the first Philippine President to stay in the palace. A total of 18 Spanish governors-general and 14 American civil governors resided in it until then, before the palace became the official residence of all subsequent Filipino presidents.

On December 30, 1953, the then President Ramon Magsaysay issued an Executive Order after his inauguration, which formally changed the name of the palace from "Malacañan Palace" to "Malacañang: Residence of the President of the Philippines". This new nomenclature quickly established itself and was retained until it was informally abandoned during the Marcos administration . During the reign of Corazon Aquino , for historical reasons, a distinction was made between the "Malacañan Palace" as the official residence of the President and "Malacañang" as the name for the President's office .

The palace became known as the residence and official residence of President Ferdinand Marcos and his wife Imelda Marcos , who spent the longest time in the official residence between 1965 and 1986. As first lady, the first lady supervised the reconstruction of the palace and had it decorated according to her own extravagant taste. After the student riots in the early 1970s, in which the palace gates were almost broken, Marcos declared a state of emergency over the country and the complex was subsequently closed to the public. After Ferdinand Marcos lost power in 1986 through the EDSA revolution , the palace complex was finally stormed by the population. This allowed the international media to cover the excesses of the Marcos family, one of the best-known examples of which was the infamous shoe collection of the President's wife, consisting of thousands of pieces.

Today the complex of the Malacañang Palace consists on the one hand of the Bonifacio Hall . This building was previously the main guest house, which was used by Ferdinand Marco's successor Corazon Aquino as an office and by Joseph Estrada as a residence. Next to it is the Kalayaan Hall , the former presidential office, which was built under the American administration. The complex also includes the Mabini Hall , which is an administrative building, and the new executive building, which was built by President Aquino. Adjacent are other, smaller buildings on the site that are also part of the palace. On the opposite side of the river is Malacañang Park , which includes the gardens, a golf course, quarters for the palace guards, as well as the presidential rest house ( Bahay Pangarap ) from the time of the Commonwealth and a leisure hall.

The study and the historical rooms of the palace are open to the public today. This was not the case in the time of Marcos, especially during the tenure of Ramon Magsaysay when the palace had to be closed to the public and heavily guarded due to the political unrest. The protesters gathered along Mendiola Street at the time to vent their opposition to the government from there. 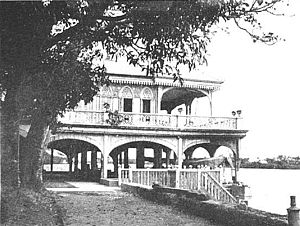 The Malacañang Palace in 1898.

In addition to the residence, the palace is also the official office of the President, similar to the American Oval Office in the White House . The offices are located on the second floor of the building while the former presidential office in Kalayaan Hall has been renamed Quezon Room . The desk has been in use since the time of the Philippine Commonwealth, after the official desk of the then American Governor General was transferred to the United States. It was first used by Quezon and then by all other Filipino presidents until Marcos' reign, officially until 1978, when he moved him to his private study. It was restored during the tenure of President Fidel Ramos and then used by Joseph Estrada before being restored again by President Gloria Macapagal Arroyo .