Manifesto of free early Christianity to the German people 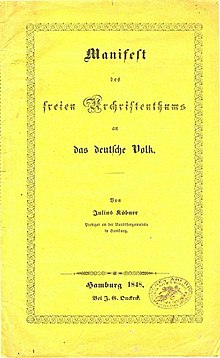 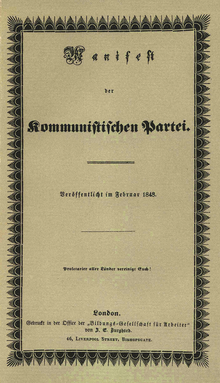 For comparison: front page of the Communist Manifesto (February 1848) 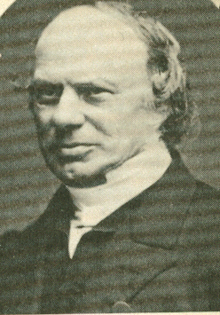 Julius Köbner, author of the manifesto

The Manifesto of Free Primitive Christianity to the German People (short title: Manifesto of the Free Primitive Christian (h) ums , also Köbner's Manifesto ) is a pamphlet by the German Baptists published in 1848 . It was directed against the state church and demanded religious freedom - not only for followers of their own denomination, but “for everyone, be they Christians, Jews, Mohammedans or whatever”. The author of the manifesto was the Baptist founding father Julius Köbner . The 22-page document was published for the first time by the Johann Gerhard Onckens publishing house , today's Oncken-Verlag .

When drafting his manifesto, Köbner did without sub-headings. In his introduction to Köbner's Manifesto, Markus Wehrstedt starts from four sections into which the pamphlet can be roughly divided.

Without mentioning them directly, Julius Köbner welcomes the revolutionary events of 1848 in the first part of his “to the German people” pamphlet . Behind them he sees the work of Almighty God who "broke the chains of your civil subjugation". He particularly emphasizes the newly won freedom of expression and speech , which not only makes it possible to express the "political truth", but also creates space for the preaching of the "Christian truth". So far only the “monopoly churchism” has been allowed to use the word to hide the fact that “Christianity and state clergy are just as different as Christ and Caiaphas ”.

In the second part, Köbner brings charges against the churches privileged by the state. The consequence of this privilege is the abuse of power, which manifests itself primarily in the form of inquisitorial measures against those who think differently. He finds numerous evidence for this in the history of the Church: "Not only did the times of the heretic burnings , not only the times of the Reformation, our days have shown that too [...] Those of your sons and daughters whose crime it was to pay homage to early Christianity with rejection of the state clergy, to be attacked with police officers and gendarmes in the most sacred moments of their lives, to scatter them by force, to compel them, as in the days of the Huguenot persecution in France, to worship in the most hidden corners of lonely forests, ambushed for them on the country roads, [...] they were left to languish in prisons, separated from women and children, in order to persuade them to promise that they would give up their worship, but to no avail, not even in a single one Fall. ”In this context, his criticism is particularly directed at the Protestant clergy.

In the third part, Köbner contrasts early Christianity with the Roman or Protestant state church and describes it as a "purely spiritual, religious connection" that renounces the use of state authority. One of the principles of the early Christian church is to serve, not to exercise rulership. It respects the equality of its members and uses the resources of democracy in decision-making and decision-making. It should therefore only consist of free and responsible members. Only those who desire it out of free “heartfelt conviction” find acceptance into the early Christian community. The “free primitive Christianity” can therefore be understood as the “system of pure healthy [= enlightened] reason”.

The fourth part closes the manifesto with the demand for “honesty” and the call to put an end to all “pseudo-piety and hypocrisy” that a state church is promoting. Everyone should be able to freely express their views and religious convictions in the new democratic Germany:

“ It is just as civilly honorable to be an antichrist, a humanist or whatever one wants to call oneself as a Christian; so that nobody is misled into bearing a false name. Praise be to God that civil emancipation and complete equality of all religions has come about. "

The political upheavals mentioned in the Manifesto were related to the so-called March Revolution of 1848 , which was primarily supported by liberal forces and, in addition to the unification of the German principalities, primarily aimed at democratic reforms and the implementation of civil liberties. For Köbner, this revolutionary movement was a “wonderful earthquake which threatened to collapse from the west to the east, from the south to the north of the strong castle of the princely power [...]”. This earthquake - according to Köbner - “also seized the building of priestly power [...]. The two powers had stood together for fifteen centuries [...]; even the Reformation did not separate them, but only bound them more intimately. Then in 1848 the cry was heard everywhere: Freedom of religion !, separation of the church from the state! [...] ". Köbner understands the 1848 revolution and the dissolution of the marriage of throne and altar, which, from his point of view, began with it as “the judgment of the Lord, the great God”. He had already welcomed the lifting of press censorship, the “oppressor of divine and human rights”, in a Baptist magazine. He also saw God's intervention in this: "To him, who knows how to do everything, be thanks and praise for the freedom of the word!"

When Köbner published his manifesto in 1848, the year of the revolution, the German Baptist movement was almost 15 years old. In this relatively short period of time, 25 congregations and numerous mission stations were founded in the various German states. However, this spread did not occur without resistance from the state and state church authorities. Baptist meetings were broken up by the police, preachers and missionaries were fined and imprisoned, marriages refused and the children of Baptist families forcibly baptized . “The relationship to the state and authorities” - according to the theologian Thorwald Lorenzen - “is characterized by painful experiences among Baptists. [...] their practice of faith as discipleship, church as community and baptism of faith have triggered offense and resistance. "

For Köbner, however, more essential than these painful experiences, which the Mennonites , Anabaptists and other free-church- oriented communities had before the Baptists , was the demand for separation of church and state , which he derived from the New Testament and which, from the beginning, became the basic convictions who belonged to Baptists. Both the Baptist founding father Thomas Helwys (1550–1616) and Roger Williams (1603–1683), the father of American Baptism, were pioneers of religious freedom and early advocates of the separation of church and state.

Julius Köbner sent his manifesto also in Frankfurt , meeting National Assembly . Under the date "1. to September 4th [1848] ”, the stenographic report on the negotiations of the German constituent national assembly recorded, among other things, the receipt of his petition , addressed to the“ constitutional committee ”of the national assembly. There it says under number 5 (2913): "A number of copies of the early Christianity to the German people, by Julius Köbner, preacher at the Baptist community in Hamburg [...]". The stenographic report does not reveal whether this submission was the subject of negotiations .

Köbner's manifesto was banned by state censorship as soon as it was published. Only 79 years after it was first published, the manifesto of free primitive Christianity was given a new edition with commentary. It can be found in the anthology Um die Gemeinde published in 1927 by the Association of Friends of Christian Books . Selected writings by Julius Köbner . Hermann Gieselbusch was responsible for the selection of the fonts and thus also for the inclusion of the manifesto . The text posted by Gieselbusch has, however, been shortened. He deleted the biblical quotations used by Köbner, a reference to the Baptist creed of 1847 and three sentences, "which contain an unnecessary failure to pay for official [church] acts."

In 1989, Erich Geldbach referred to Köbner's manifesto and its significance in his work Freikirchen - Erbe, Gestalt und Effect . It was published on the Internet in 1999 on the initiative of Frank Ley (Dortmund). In 2004 the free church commissioner at the seat of the federal government added a copy of the Köbner pamphlet to his so-called work report.

In 2006, on the occasion of Julius Köbner's 200th birthday, the book, edited by Markus Wehrstedt and Bernd Wittchow, was published: Julius Köbner. Manifesto of free early Christianity to the German people . The text of the manifesto published in this book was created by Günter Balders based on the original.