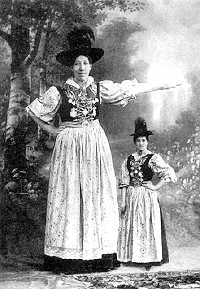 Maria Fassnauer with her sister Rosa, around 1910

Maria Fassnauer was born on February 28, 1879 as the first of six children at the Staudnerhof, a mountain farm in the South Tyrolean Ridnaun Valley . Her parents were Josef and Theresia Fassnauer. Moidl, as she was also called, was a normal toddler until she was three years old, after which her strong growth began. Her siblings and parents were all of normal stature. Your exact height is not known. Various sources give values ​​between 218 and 240 cm. It is reasonable to assume that the high values ​​are exaggerations. Your body weight should have been between 170 and 200 kg.

After their family lived in great poverty, the parents allowed themselves to be persuaded by a resourceful showman to send their Maria on a journey. Between 1906 and 1913 she traveled through Austria , Germany and England as a fairground attraction , where people were allowed to look at the “tallest woman in Europe” for a fee. Their natural size was further increased by shoes with about ten centimeters high heels and high hats. Much of the size information is from this period but should be used with caution as the giantess' managers intentionally exaggerated to attract the audience. A body height of 2.27 m is considered to be safe today.

After health problems and the beginning of the First World War made further trips through Europe impossible, Maria Fassnauer spent the last years of her life on her home farm in Ridnaun. On December 4, 1917, Maria Fassnauer died of dropsy at the age of 38 .