Marie Duplessis in the theater, by Camille Roqueplan

Alphonsine Plessis was born on January 15, 1824 in a small village in Normandy. Her childhood and early youth were marked by great poverty. At a young age she worked as a maid in an inn, then in an umbrella factory.

When she was about 15 she came to live with relatives in Paris, where she initially made her way as a laundress and cleaner until she became the lover of a wealthy merchant who furnished her a small apartment and offered her modest luxury.

Within a short time the peasant girl became one of the most sought-after and expensive courtesans in Paris. She learned to read and write, took piano lessons, and was ultimately regarded as extremely well-educated and well-read. She changed her name and Alphonsine Plessis became Marie Duplessis. Alexandre Dumas the Elder was among her lovers . J. and Franz Liszt , to their close friends Théophile Gautier and Jules Janin . Marie was famous for her extraordinary beauty, elegance, tact and style. Allegedly, it never occurred to anyone who met her for the first time that they were looking at a prostitute . Marie was very fond of flowers, especially camellias . On 25 evenings a month she is said to have had white flowers in her hair or on her dress on the other evenings when she had her period . Alexandre Dumas, who adopted this peculiarity in his novel, claimed that no one had known the reason for this color change - a claim that hardly corresponded to the facts, but represented a device by the author to emphasize his “intimate” relationship with the protagonist of his work .

In January 1846 Marie married the 29-year-old Count Édouard de Perregeaux, son of the French Count and politician Alphonse Perregaux, at the registry office in the London borough of Kensington . Marie suffered from tuberculosis and was already seriously ill. Even so, her life was now wilder and more exuberant than ever. Barely a year later, on February 3, 1847, she died in her apartment on 11 Boulevard de la Madeleine in Paris. She was only 23 years old.

Her grave is in the Montmartre Cemetery in Paris. The small tomb with the words “Ici repose Alphonsine Plessis” is still adorned with flowers over 170 years after her death, which the visitors put there. 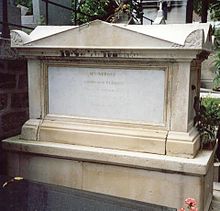 Grave on the Cimetière de Montmartre

Marie's death caused a certain stir. When their estate was auctioned, the good and the less good Parisian society came together. Théophile Gautier and Jules Janin dedicated an obituary to her. The writer Alexandre Dumas d. J. , son of the creator of the “Three Musketeers”, set her a literary monument with his extremely successful novel “ The Lady of the Camellias ”, in which he worked through his own relationship with Marie. From this novel, in which he named her "Marguerite Gautier", he made a play of the same name some time later, which was premiered in 1852.

The Italian composer Giuseppe Verdi knew the novel as well as the stage version and created the opera “ La traviata ”, in which Marie was named “Violetta Valery” and which was premiered in Venice in 1853.

Much has been said and written about Marie Duplessis, but perhaps the most beautiful and moving obituary comes from Franz Liszt: “Poor Mariette Duplessis”, he is supposed to have said, “when I think of her, a mysterious chord of one rings out in my heart ancient elegy ”.