As engine key (also: machine-key ) is in the cryptology a key method ( encryption or decryption method called), which in contrast to a manual device , is thus carried out, for example, with pencil and paper manually, but in which a key machine (umbrella term for encryption and decryption machine). 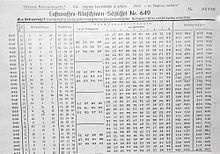 This board with the title "Luftwaffe Machine Key No. 649" contains, in contrast to the commonly used key boards, an additional column "Plug connections on the reversing roller ", as it was used from 1944 on some units of the Luftwaffe (see also: Reversing roller D ).

One of the most famous machine keys uses the Enigma machine . It was used by the German Wehrmacht to encrypt their secret communications during World War II . Other examples are the German Lorenz key machine , which was also used at the time, and the American M-209, which the Germans called "American Machine No. 1 (AM-1)" at the time .

The keys belonging to the machine , which were mostly changed daily and were often listed on key boards  (picture) , also bear this name (see also the authentic key board with the title “Air Force Machine Key No. 619” under web links ).