Rotor cipher machines (also rotor key machines ) are mechanical or electromechanical encryption and decryption machines , which usually contain several rotors with letters , which generate a different ( polyalphabetic ) replacement for each letter of the text . They were in use from around 1920 to 1960, especially during the Second World War and in some cases until the mid-1970s. Some successor models were not declassified until the 1990s. 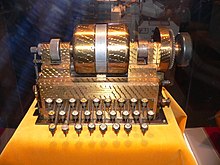 The rotors are arranged as rotatable rollers and their position relative to one another changes during the keying process. On their outer surfaces they have several contacts (often exactly 26 for the 26 capital letters of the Latin alphabet ), which are connected to one another by insulated wires on the inside. The rotation of the rotors creates a different replacement for each letter of the text. The cryptographic security of the encryption depends essentially on the number of rotors used, since this increases the number of possible replacements (also called key space) multiplicatively .

Based on technologies that emerged at the beginning of the 20th century, such as the electric typewriter and the teleprinter , several inventors came up with the idea of ​​the rotor principle for encrypting texts, independently of one another and almost simultaneously. The first were the two Dutch naval officers Theo A. van Hengel and RPC Spengler in Batavia (then the capital of the Dutch East Indies , now Jakarta ) in 1915 . However, they were not allowed to apply for a patent for their invention. The next was in 1917 the American Edward Hugh Hebern ( patent application 1921 ). In 1918 the German Arthur Scherbius followed, and finally in 1919 the Dutch Hugo Alexander Koch and the Swede Arvid Gerhard Damm , who applied for patents for all their ideas for rotor cipher machines .

One of the first rotor machines to be realized was the electric code machine by the American inventor Hebern. It only had a single rotor. Other well-known rotor cipher machines are the German Enigma (1923, initially with four rotors), the British TypeX (also known as Type-X, with five rotors), the Soviet Fialka (German "Veilchen" with ten rotors), the Swiss Nema (for "new machine" with ten rotors) and the American Sigaba (15 rotors). The Fialka was used in the Warsaw Pact until its collapse for the transmission of communications between armies of the participating states.