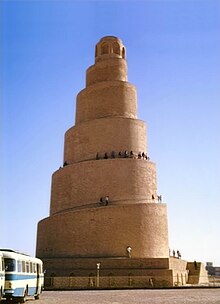 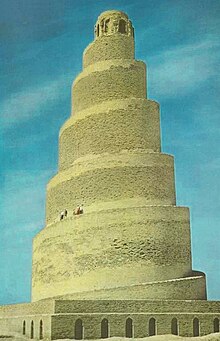 Spiral minaret of the great mosque of Samarra

The minaret of Samarra in today's Iraq is the minaret of what was once the largest mosque in the Islamic world (so-called Great Mosque of Samarra ). It belongs to the rare type of spiral minaret and is therefore known in the Muslim world under the Arabic expression for spiral:الملوية al-Malwiyya , DMG al-Malwiyah .

The 52 m high Malwiyya stands in Samarra and rises 27 m in front of the Great or Friday Mosque , which the Abbasid caliph al-Mutawakkil had built in 852. The mosque, which was destroyed in the 13th century, had a rectangular floor plan of 240 × 160 m. The courtyard was enclosed on all sides by Liwanen ( colonnades ). Today, next to the minaret, only the outer walls of the mosque remain.

The Malwiyya should not be confused with the similar, but smaller, minaret of the Abu Dulaf Mosque, 20 km north of Samarra.

At that time Samarra was the seat of government of the caliphs . The city on the upper Tigris experienced its heyday under the caliph al-Mutawakkil (847–861). Although Samarra was only temporarily the residence of the Abbasid caliphs, the artistic, literary and scientific achievements of this city are legendary in Arab history to this day.

It is generally believed that the minarets of the mosques of Samarra and Abu Dulaf were modeled on the Mesopotamian ziggurats . The reason for this assumption is the comparable spiral-shaped outer spiral staircase, the square pedestal and the similar structure for the muezzin . The Shiites avoid going there because several hundred Shiites, mostly descendants of Fatima and Ali and consequently the Prophet, were walled up inside. When they see it, they recite the opening sura of the Koran for the souls of those murdered there.

The Malwiyya has been inducted into the US Department of Defense's Archeology Awareness Card Game. The card game was created to educate US military personnel about the importance of respecting cultural heritage while deploying in Iraq and Afghanistan .

On April 1, 2005, the top of the Malwiyya was damaged by an explosion. The insurgents reportedly attacked the tower because US forces were using it as a lookout point. The force of the explosion tore pieces of brick along the ramp to the left.