Taucha is a district of the town of Hohenmölsen in the Burgenland district in Saxony-Anhalt .

Taucha is located between Leipzig and Weißenfels in the Rippachtal nature reserve . The Rippach , a right tributary of the Saale, flows through Taucha .

Taucha was first mentioned in 1004. On January 1, 2010, the previously independent community of Taucha was incorporated into the town of Hohenmölsen together with Granschütz . 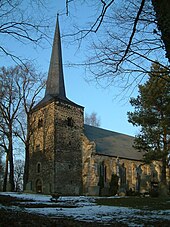 The village church was built in 1421. Your most valuable piece of equipment is the Ladegast organ.

Disposition of the Ladegast organ from 1875:

The organ was restored at the end of 2009 by organ builder Thomas Schildt (Halle).

Districts of the city of Hohenmölsen