The Minin and Pozharsky Square ( Russian Площадь Минина и Пожарского Ploshchad 'Minina i Poscharskogo Short Name -.  Mini Square ) is the main square of Nizhny Novgorod . It is a social and cultural center of the city and is located in the Nizhegorodsky district on the southeast side of the Kremlin .

The square connects the central streets of the city: Bolshaya Pokrovskaya , Varvarskaya, Ulyanov, Minin Street , Upper Volga Embankment and Selensky Descent. There are many architectural attractions, the Minin University, the Lobachevsky University and the Medical Academy; Minin and Chkalov monuments ; Exhibition complex, as well as the first city fountain.

The place is a roadway. Road traffic only overlaps on holidays and during other events.

At first, the square was unofficially referred to as Verkhneposadskaya . It was the center of the Upper Posad. In 1697 the Annunciation Cathedral was built and the square was named Blagoveshchenskaya (Annunciation) .

The first regular plan of the square was drawn up in 1770. After the fire of 1768, a regular urban development plan was drawn up in the St. Petersburg Building Commission at the request of the governorate authorities, but the lack of local experienced urban planners hampered implementation of the plan. According to the plan, the square was trapezoidal. The plan established the directions of the departing streets and only made stone houses available for the construction of the square and the adjacent streets.

The conversion of the square began in 1779 when Yakov Ananyin was appointed architect. In 1782 the old bridgeheads were dismantled and the trench was filled. Rows of timber trade stalls were built in their place. During the general demarcation of the city in 1784–1787, new streets were laid and wooden structures in the center of the square were destroyed. In 1787 a complex of post office buildings was built. The line between the Varvarskaya and Tikhonov (now Ulyanov) streets was occupied by the manor house with the outbuildings of Lieutenant Governor Pyotr Yelagin. Private houses on the sides of the square that do not conform to the plan were preserved until the early 19th century. The buildings were not repaired so they could later be demolished.

After the October Revolution , the Annunciation Square was renamed “Soviet Square”. All ecclesiastical paraphernalia were looted from the Cathedral of the Annunciation and the Church of St. Alexius the Metropolitan, and a variety of commercial stores were opened in the buildings themselves. Both churches were demolished in the 1930s. The Bolsheviks also demolished a monument to Alexander II . For a long time there was only an empty base, which it was decided to destroy.

In the years 1935–1937, the Leningrad Institute "Giprogor" developed a general plan for the socialist city of Gorky (name Nizhny Novgorod in Soviet times), which resulted in a radical change in the existing planning structure. At that time, the Soviet Square was designed in a circular manner, its area was significantly increased by the demolition of some of the walls and towers of the Kremlin, which in those years were perceived as “a monument to stingy feudalism and tsarist autocracy, witness to the terrible sides of the bloody past” has been.

The implementation of these projects was prevented by the outbreak of the Second World War .

In 1943, at the regular meeting of the Gorky Regional Committee, it was decided to raise the morale of the citizens in the fight against National Socialism. For this purpose, the first monument to Kuzma Minin was erected in the square, which from now on was called Minin and Pozharsky Square.

In 1985 the old Minin memorial was dismantled and sent to Balachna for restoration , where it remained. Four years later, in 1989, a new monument was erected by the Soviet sculptor Oleg Komov .

After the dissolution of the Soviet Union, in the early 1990s, individual stalls and trading tents were installed in the square. But they didn't last long. In the early 2000s, an initiative was launched across the city to eliminate small retail stores in central squares and streets.

At the beginning of 2009, the city and region administration considered the projects proposed by investors for the reconstruction of Minin and Poscharsky Square. The projects provided for the construction of an underground shopping and entertainment center. It was also proposed to restore the Cathedral of the Annunciation and the Church of St. Alexius the Metropolitan. The change in the usual shape of the square was considered unacceptable. The town planning council under the governor approved one of the projects, despite the need for many years of preparatory work by archaeologists, as well as the risk of deterioration in the traffic situation due to the creation of an additional point of attraction.

From the ends of the square go Zelensky Descent (southwest end) and St. George Descent (northeast end). Five streets radiate out of the semicircle of the square: Poscharsky, Bolshaya-Pokrovskaya, Alekseevskaya, Varvarskaya and Ulyanov. From the north of the square go to Minin Street and the Upper Volga embankment. 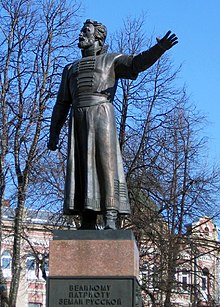 It is in the middle of the square in front of Demetrius Tower.

Nicholas II at the presentation of the laying of the monument to Minin and Poscharsky on the Annunciation Square.

The idea of erecting a monument to Kuzma Minin and Prince Poscharsky on the Annunciation Square was close to being realized at the beginning of the 20th century. In 1912, the competition was won by a sketch of the monument by the sculptor Vladimir Simonov, who was given the right to create a sculpture. On May 17, 1913, in the presence of Emperor Nicholas II , who visited the city in connection with the celebration of the 300th anniversary of the Romanov dynasty, the construction of a monument began. But World War I prevented the monument from being installed, and in 1918 the Bolsheviks decided to destroy the monument that was being erected. Granite base was used for other purposes, the fate of the bronze sculpture is unknown.

During the Second World War , the city decided to remember before Soviet history in order to uplift the patriotic spirit of the people. A competition of sketches of the Minin monument was announced in Gorky. Many sculptors took part in the competition, but sculptor Alexander Kolobov, who had his own workshop, started working on the monument before the rest, while the rest of the artists were still making sketches. As a result, the monument to Minin was made within a few months. It was inaugurated on November 7, 1943, and the square was renamed in honor of Minin-and-Poscharsky.

The figure of Minin was made of a short-lived material - concrete. It was painted in a bronze color. In the summer of 1985, a monument in need of repair or replacement was dismantled and sent to Balachna , the hero's homeland. On June 1, 1989, a new monument was erected by the sculptor Oleg Komov. The old monument, in the same year, was installed on the Soviet Square in Balachna.