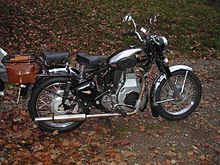 The engine Hatz GmbH & Co. KG , based in Ruhstorf an der Rott is a German diesel engine manufacturer , who is best known for his light and robust small diesel engines.

The personally liable partner of Motorenfabrik Hatz GmbH & Co. KG is Hatz Beteiligungs GmbH , based in Ruhstorf an der Rott.

In the 1990s, the production of numerous new developments began; These included air-cooled single-cylinder diesel engines from the 1B series with a vertical shaft. Diesel engines from Hatz are also built into motorcycles due to their low weight. For example, For example, the Sommer Motorradmanufaktur based in Eppstein introduced the 1B40 single-cylinder four-stroke diesel engine (462 cm³, 8 kW / 11 PS) to convert the Indian Royal Enfield motorcycle series (Sommer Diesel 462 model). 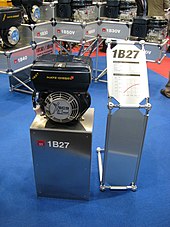 The portfolio of Motorenfabrik Hatz comprises three business areas: diesel engine construction, system construction and the production of components for the automotive and commercial vehicle industries.

The product range currently consists of six engine series in a power range from 1.5 to 56 kW.

With the slogan “The Challenger”, the Hatz 1B series was presented in 1996 with a number of technical innovations. All important functional components of the engine such as automatic decompression, injection pump drive, oil pump with oil pressure control valve, inlet and outlet control drive, centrifugal governor, speed adjustment lever with governor spring and the multifunctional mechanical governor are integrated in the control housing in a very small space. Because of these developments, the B series is very light and compact.

The air-cooled single-cylinder diesel engines of the B-series are available with an output of 1.5 to 7.6 kW and a maximum speed of up to 3600 min −1 , depending on the displacement . Versions with vertical and horizontal crankshafts are also available. The B-series meets the requirements of the EPA (Environmental Protection Agency) Tier IV final in the USA .

In contrast to the B series, the D series, also called SUPRA, has a much more robust design. The air-cooled single-cylinder diesel engines of this series can often be found in compression machines, but also in other areas of application, such as power generators. The power range is between 3.5 and 15.2 kW at a speed of max. 3600 min −1 . The maximum torque is 40.7 Nm. The high running smoothness of the series is achieved through a new design of the counterweights, on the other hand through the optional use of two counter-rotating balance shafts and thus a 100% first-order mass balance. If required, the motor can be equipped with the patented SILENT PACK © at the factory, which reduces noise emissions by up to 90%. In addition, the D-motors have up to four power take-off options on the crankshaft or on ancillary drives. Like the B series, the motor is also available in a horizontal or vertical version. The D series also meets the requirements of EPA Tier IV final.

The G series is characterized by its low weight and ease of maintenance. The power of the air-cooled two-cylinder diesel engine is between 9.8 and 17 kW at a maximum speed of 3600 min −1 and a maximum torque of 53.6 Nm. The cylinders are arranged vertically and can be exchanged individually. The crankcase is made of light metal die-cast. The G-Series engines meet the requirements of EPA Tier IV final.

The most powerful Hatz engines are those of the M series. The performance of the air-cooled 2-, 3- or 4-cylinder engines, ranging from 15 to 56 kW at a maximum speed of up to 3000 min -1 . The maximum torque of the 4-cylinder version is 219.6 Nm. Thanks to the air cooling, the engine can be operated under all climatic conditions. A diesel particulate filter and exhaust gas recirculation have been available for the M series since July 2013 in order to comply with exhaust gas regulations in the USA (EPA Tier IV final) and the EU (Stage IIIB).

The L series is largely identical to the M series. The only difference between the series is the patented SILENT PACK © of the L series, which reduces the noise level by up to 90% compared to the unencapsulated M series.

Hatz has been offering the H series since January 2014. Starting with the liquid-cooled 4-cylinder model 4H50TIC, common rail technology, turbochargers and external exhaust gas recirculation are used. The turbo-charged 2-liter engine has a maximum output of 55 kW and weighs 173 kg. The engine meets the limit values ​​of EU 97/68 Stage IIIB and EPA Tier IV final without a particulate filter.

The Hatz Systems division develops and produces special units based on industrial diesel engines. The focus is on solutions for everything to do with electricity and energy supply, scalable power plants, pump units and special applications in the maritime and military sectors. The spectrum of Hatz units ranges from 2 kW to several 100 kW of power. In addition to a standard program with common output sizes in the product groups of power generators, pump technology and ship propulsion, power units are also designed specifically for the customer.

The Hatz Components business area produces engine and drive elements such as connecting rods, crankshafts, housings, rotating and control parts for engine manufacturers worldwide. In addition to form, oval and deep hole drilling, the manufacturing processes used also include crack technology as well as separating cut and profile teeth. The processing of high-strength, micro-alloyed steels, aluminum, cast iron and sintered materials is rounded off by the processing of titanium.

Between 1953 and 1964, the Hatz company offered 23 different types of tractors . A total of 7201 pieces were produced. Mainly small and universal tugs were manufactured, but at the beginning of the 1960s Hatz also produced larger tugs with powerful two- and three-cylinder engines .