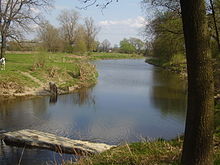 The parish church of Christ the King

Ruhstorf an der Rott (officially: Ruhstorf adRott ) is a market in the Lower Bavarian district of Passau .

The market is located in the lower Rottal , on the edge of the Lower Bavarian spa triangle . The municipal area covers about 51 square kilometers. The border with Austria is ten kilometers away.

The community of Ruhstorf an der Rott has 71 districts:

The place was mentioned as "Ezzinpah" as early as 795 with reference to a stream that flows into the Rott there. In the 12th century different forms of the current name appeared, 1188 "Ruzsdorf" and already around 1230 "Ruhstorf". The name refers to the location of the village on the Rott .

At the end of the 13th century, Wernhero Walchuno de Ruestorf, the Ruhstorf family, appeared for the first time. These were important ministerials of the Wittelsbach family , who owned the open Hofmark Ruhstorf until they died out in 1735 . Then the Hofmark passed into the possession of the Counts of Fränking . After that, the Counts of Taufkirchen held them until the 19th century.

Ruhstorf an der Rott belonged to the Landshut Rent Office and the Griesbach Regional Court of the Electorate of Bavaria . In the course of the administrative reforms in Bavaria , today's municipality was created with the municipal edict of 1818 .

Hader Cemetery : Memorial to the children of Barhof

On September 1, 1877, Ruhstorf received a railway connection with the opening of the Rottalbahn . In 1895 Heinrich Loher founded a repair shop for agricultural machines in Ruhstorf, from which Loher GmbH developed. The second down-to-earth industrial company, the Hatz engine factory , was founded in 1880 by Mathias Hatz.

In addition to the jobs, apartments were also built, and after the end of the Second World War, many expellees settled in Ruhstorf. In 1973 there were around 2300 employees at Hatz and Loher. Together with the neighboring town of Pocking, Ruhstorf is classified as a joint medium-sized center in the Bavarian state development program .

As part of the regional reform in Bavaria , the communities Schmidham and Hütting and parts of the community Eglsee came to Ruhstorf on January 1, 1972, Eholfing and part of Sulzbach am Inn followed on July 1, 1972.

The town hall of Ruhstorf

The municipal council has 20 members.

The first mayor is Andreas Jakob (CSU), who was elected in 2014 with 51.75% of the valid votes. Second mayor is Markus Lindmeier (non-party voter group Sulzbach-Eholfing-Eglsee), third mayor Josef Hopper (citizenship of Hütting)

Blazon: split by black and gold, a silver place in front; behind a black gear; growing up from the lower edge of the shield, a spike split in silver and black.

Ruhstorf an der Rott is relatively conveniently located on the B 388 and in the immediate vicinity of the B 12 and the federal motorway 3 ( Pocking exit ). After Passau is 22 km, to Schärding km (Upper Austria) 10, according to Simbach km 35, after Pfarrkirchen km 20 and after Vilshofen km 30th The place has its own stop on the Passau – Neumarkt – Sankt Veit railway , also known as the Rottalbahn and known as the longest branch line in Bavaria.

The economy of the community is mainly supported by two companies, Siemens AG (formerly Loher GmbH ) on the western outskirts and the Hatz engine factory in the south.

Municipalities in the district of Passau