This article deals with the community of Ortenburg in Bavaria, for other meanings see Ortenburg (disambiguation) .
Template: Infobox municipality in Germany / maintenance / market 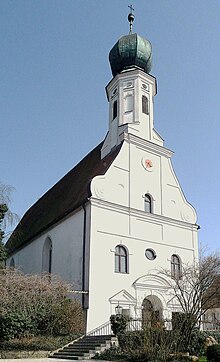 Ortenburg is a market in the Lower Bavarian district of Passau and a state-approved resort .

Neighboring communities are Haarbach , Beutelsbach , Vilshofen an der Donau , Fürstenzell , Bad Griesbach im Rottal . A little further away are the cities of Pocking and Passau .

The municipality of Ortenburg includes 112 districts: 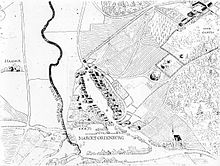 Drawn "aerial view" of Ortenburg by Count Friedrich Casimir around 1625

The Ortenburg market in the Wolfach Valley can look back on around 900 years of history. Around 1120 the Counts of Ortenburg settled down. At the same time, the noble free von Kamm appeared. These moved to Hals in the course of the 13th century . The Counts of Ortenburg, who come from the Spanheimers ' house, however, built their ancestral castle above the town, which later became the center of their direct imperial county of Ortenburg .

The counts have always been among the most respected and powerful families of the Bavarian aristocracy , so that they rivaled the Wittelsbachers in power and property . They had their greatest extent of ownership in the 12th and 13th centuries, when their possessions stretched from Brixental to far into the Upper Palatinate.

The Tuschl family from Söldenau appeared in the 13th and 14th centuries . They rose from ministerials of the Counts von Hals and Ortenburg to the rank of knight. In the 14th century they had a lasting impact on the Lower Bavarian region with the establishment of numerous castles, such as the construction of their ancestral castle Söldenau by Schweiker I. His son, Heinrich Tuschl , was considered one of the richest noblemen of his time. He is also the famous Knight Alone in the legend of the same name. In 1397 the Tuschl family died out.

During the Landshut War of Succession in 1504, under the reign of Count Wolfgang , the market and the ancestral palace were looted and pillaged. Originally the resident counts and the place was called Ortenberg . In 1531, the then ruling Count Christoph renamed his county and the place Ortenburg due to an inheritance dispute . With the name change, the count's family wanted to clarify their inheritance claims to the Carinthian county of Ortenburg . The Ortenburg imperial counts did not win this dispute, however, as there were no degrees of relationship with the extinct noble family. The renaming of the place remained until today.

In 1563 Count Joachim , based on the Augsburg Religious Peace of 1555, introduced Lutheran teaching in Ortenburg . Ortenburg became an enclave in the Catholic area. In 1626, during the Thirty Years' War , Count Friedrich Casimir settled religious refugees from Austria around Ortenburg, from which the districts of Vorder- and Hinterhainberg emerged.

Countess Amalia Regina introduced compulsory schooling in Ortenburg in 1703 - 99 years before it was introduced in Bavaria.

In 1805, Count Joseph Carl exchanged the imperial county of Ortenburg for the former monastery office of Tambach . Ortenburg thus became Bavarian . The counts have lived in Tambach near Coburg since then .

The Catholic parish church Maria Himmelfahrt, built from 1892 to 1894

Ortenburg was originally a Protestant enclave in the Catholic area. Today the following parishes exist in the municipality:

On January 1, 1982, parts of the town of Griesbach in the Rottal, which at that time had around 40 inhabitants, were added. 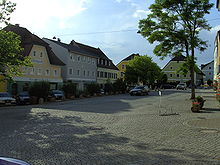 The market square of Ortenburg

Based on the election on March 15, 2020, the municipal council is composed as follows:

Compared to the 2014 to 2020 electoral period, the SPD lost one seat to the ÖDP / Active Citizens.

The first mayor has been Stefan Lang (CSU) since the 2014 local elections, who succeeds the first mayors Hans Halser, Reinhold Hoenicka (CSU) and Fritz Gebessler (CSU) provided by the ÜW. Stefan Lang was elected to office with 66.49% and was confirmed for another six years in two competitors on March 15, 2020 with 85.9% of the votes.

The deputies have been the 2nd Mayor Harald Roitner (CSU) and the 3rd Mayor Michael Straubinger (CSU) since May 2020. Her predecessors in the 2014 to 2020 term of office were Ludwig Nothaft (CSU) and Heinrich Stocker (ÜW).

Blazon : a slanted silver pinnacle bar on a red background .

The Maskara Theater continues the old tradition of the Commedia dell'arte and tells fairy tales for young and old. 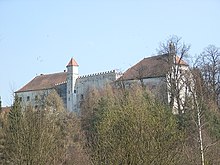 Rapoto I , ruling count from around 1120–1186, had the Ortenburg built around 1120, but it was burned down in 1192 by Duke Leopold of Austria . In the Landshut War of Succession , Ortenburg Castle was destroyed again in 1504. The reconstruction took place in the years 1562 to 1567 by Count Joachim . Ortenburg Castle has been privately owned since 1972 . The castle was extensively restored from 1972 to 1991 and now houses a castle museum with a splendid Renaissance courtyard with arcades and the famous Renaissance wooden coffered ceiling in the castle chapel.

Originally there was a second castle in Ortenburg. These two castles gave the districts Hinterschloß and Vorderschloß their names. The castle that can be visited today is the older castle of the two and was then called Alt-Ortenburg. Neu-Ortenburg Castle in the Hinterschloß district was shot to pieces by French troops during the Napoleonic Wars and the ruins were completely removed at the end of the 19th century. However, a widely branched tunnel system was preserved under the foundation walls, which runs under the so-called "Trompetergraben" and connected both castles and was used as a shortcut and during the World Wars as a hiding place and escape tunnel until the 1960s. In the mid-1970s, however, the main entrances were buried and declared unusable.

Coming from the south, the Protestant market church shapes the image of the place from afar. Due to its history, which is closely connected to the former imperial county, the church is one of the most culturally and historically important buildings in the town. It was once a former pilgrimage chapel to Our Lady in front of the market . After the confirmation of the imperial immediacy of the county in 1573, the major remodeling of the church began, making it the Evangelical Lutheran parish church. It finally got its present form between 1703 and 1706. The church is known for its numerous magnificent grave monuments of the formerly resident counts.

The Evangelical Church of St. Laurentius in the Steinkirchen district is one of the oldest churches in Wolfachtal. It is also named after the place through its nickname Steinkirchen . Until the Reformation in Ortenburg, it was one of the largest Catholic parish churches in the Passau area. It has been used as a cemetery church since the Reformation. The church is an art-historical gem thanks to its numerous grave monuments and its historic cemetery.

The confirmation house is one of the landmarks of Ortenburg. If you approach the town from the south, you can see the imposing red three-story brick building from the 19th century very early on. Since 1892 Protestant children from the Diaspora of Lower Bavaria and Upper Palatinate have been prepared for confirmation there.

Today the Confirmation House is one of the two modern boarding school buildings that belong to the Evangelical Realschule Ortenburg.

There is an important pilgrimage church in the Sammarei district .

Ortenburg offers many opportunities for sporting activities, such as the outdoor pool, several tennis courts and a mini golf course in Unteriglbach as well as various soccer fields within the community. Various clubs for ice stock sport , chess, football, fencing, athletics and gymnastics round off the rich offer. There are also bike and hiking trails available.

The Ortenburg knight games take place every two years . You can see for example:

The Ortenburger Schlosskultur is a series of events which offers a wide range of concerts, lectures and exhibitions. This is compiled by the Ortenburg Castle Area Promotion Group.

The Ortenburger Volksfest at the beginning of August is one of the largest festivals in the district.

For decades, Ortenburg has been a destination for tourists and locals with the Irgenöd bird park and the Ortenburg wildlife park . Both are open to visitors from April 1st to October 31st (the wildlife park only in good weather, also on weekends in winter).

The generation park opened in 2017. This has a playground, exercise equipment, table tennis tables and green areas.

The market is characterized by a multi-layered medium-sized economy with numerous, internationally successful companies. There are 2,231 jobs subject to social security contributions on site (as of June 30, 2017).

Via the Passau-Mitte junction, 15 km away, there is a connection to the federal motorway 3 . The federal road 8 can be reached via Vilshofen, 10 km away.

There are public bus connections to the train stations in Vilshofen and Passau. The timetable is primarily aimed at schoolchildren and professionals. It only exists irregularly on weekdays and ends in the early evening.

The Vilshofen – Ortenburg railway line, opened in 1908, was partially shut down in 1962. In 2002, a cycle path from Ortenburg to Maierhof was built on parts of the railway embankment, which was continued in 2010 to Vilshofen. The railway line to Maierhof is still in operation for freight traffic.

The local newspaper is the Vilshofener Anzeiger , which is a headline of the Passauer Neue Presse .

There are some public institutions in the community. The administration for the citizens of the community can be found in the outsourced administration building in the Unteriglbach district. The tourist information and the community library are located in the historic town hall in the center of Ortenburg. There are also ten volunteer fire brigades in the municipality . The Bavarian Red Cross is represented with a Red Cross readiness , a water rescue local group and a social station . The Inge-Gabert-Haus, which was built in 2005, is the new senior center on Fürstenzeller Straße.

The Ortenburg market has three day-care centers in the municipality, one Protestant and one Catholic in the village itself and a Catholic in Neustift. A total of 224 children were cared for in 2017, including 33 under three years of age. In addition, there is a primary and secondary school with all-day care in Ortenburg, a primary school in Neustift, the Evangelical Realschule Ortenburg with boarding school and the Columba-Neef-Realschule in Neustift. The Ortenburg Adult Education Center also offers advanced training for adults.

Sons and daughters of the market town

Municipalities in the district of Passau