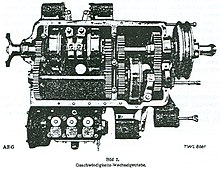 Sectional view of a NAG gearbox

In contrast to the practice of gear shifting used in automobile construction, the first internal combustion railcars required a greater torque for their mechanical power transmission. In order to keep the gearbox wear within limits, the Deutsche Reichsbahn decided on a gearbox for its first railcars in which the gear pairs to be shifted were constantly in mesh.

The transmission appeared for the first time in 1925 with the four-speed change gear WG 70 from the National Automobile Society for the railcars of the 701-704 series and was then used in around 100 single or twin-engine railcars. It is not known to be used by private railways in Germany.

Structure and mode of operation

With this gearbox configuration, the motor is directly connected to the gearbox via a cardan shaft. As with all semi-automatic gearboxes, the shifting process is not actuated directly by the driver, but the shifting is done with pneumatic control. The gear shift could only be carried out when the drive switch was in position 0 or 1 , which prevented switching on at full power.

In this gearbox, the gear pairs to be shifted were constantly in mesh. The respective gear was preselected by the engine driver, and the relevant gear was shifted smoothly using friction clutches controlled by compressed air and actuated by rods. The clutch shoes consisted of a specially impregnated fabric, which means that the gear meshes smoothly when worn. In addition, all gears and the clutches of the second to fourth gears ran in an oil bath. The clutch of the first gear was designed to be particularly strong and was located outside of the actual gearbox housing for better heat dissipation, it was housed in an extra housing with extra cooling fins.

The reversing gear was driven by a short cardan shaft from the output shaft of the gearbox . It was also switched pneumatically. Since the shift could only take place at a standstill, the arrangement with laterally displaceable gears was left with him. For all maintenance work on the gearbox and the reversing gear, flaps were arranged in the floor of the car. The drive axle (s) was driven from the reversing gear via cardan shafts and bevel gear axle drives . The gear housing was supported on the one hand on the drive axle and on the other hand guided by a torque support . This was freely stored in sliding blocks so that the respective axis could adjust to the curve radius.

Vehicles equipped with the transmission for delivery

The following vehicles were equipped with the transmission from the factory: