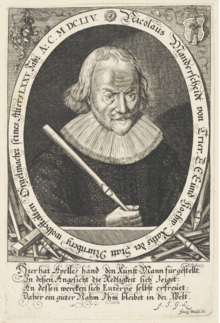 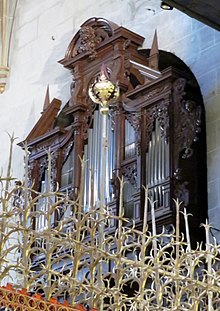 The organ of his son Sebald Manderscheidt in the St. Nikolaus Cathedral
(Freiburg im Üechtland)

Nicolaus Manderscheidt learned the organ building trade from an unknown master. He then worked as a journeyman with Stephan Cuntz in Nuremberg. He received citizenship in 1618 after becoming a Protestant. He married for the first time in 1619. On April 26, 1620 his son Hans Sebald Manderscheidt († 1685) was born; he was mainly active as an organ builder in Carinthia and Switzerland. Nicolaus Manderscheidt became a city organ builder in Nuremberg in 1623 as the successor to Heinrich Kirmes. After the death of his first wife, he remarried in 1626.

Manderscheidt's instruments have a typical formal language: They usually have a three-part brochure with a small middle field, double upper keys , a channel tremulant and roof bellows. It stood entirely in the tradition of positive construction for which the city of Nuremberg was known at the time. Only organ positives have survived from his work. In addition, he also repaired larger instruments in churches as a city organ builder.

The following positives have been preserved from his numerous works: