The Cathedral Basilica of Notre-Dame de Quebec is the seat of the Roman Catholic Archdiocese of Quebec . It is located in the old town (Vieux-Québec) opposite the Hôtel de Ville and is attached to the Séminaire de Québec (not to be confused with the Grand Séminaire de Québec ). 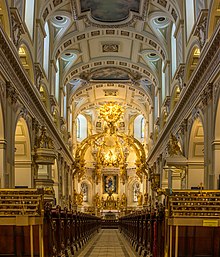 Notre-Dame de Québec is the oldest seat of a diocese north of Mexico and the oldest parish church in North America. In 1874 it was the first church to be raised to the rank of a minor basilica .

The first building dates from 1647. It was destroyed in 1759 during the siege of Québec by the British. The new building erected a few years later burned down on December 22, 1922. The present church was built from 1923 to 1930. Since June 23, 1966 it has been a listed building as the Bien culturel de Québec , and since January 1, 1989 it has been a National Historic Site of Canada ( Lieu historique national du Canada ).

During the reconstruction in the 1920s, the cathedral was built on the basis of the previous buildings. The architectural style and the furnishings are based on the styles of pre-revolutionary French classicism ( Louis-seize style). Notre-Dame is a three-aisled east - facing basilica with an ambulatory . Of the two towers of the show facade in the west, only the southern one is fully executed with an octagonal upper storey and double lantern ; the north ends in a square stump.

The cathedral has three organs , all of which were built in the 1920s by the organ builder Casavant Frères . The large main organ on the west gallery was completed in 1927. The instrument has 70 stops on four manual works and a pedal . The playing and stop actions are electro-pneumatic.

Four governors of New France are buried in the cathedral basilica:

In addition, Notre-Dame de Québec is the necropolis of the bishops and archbishops of Québec. The first bishop, François de Montmorency-Laval , rests inside the church, the rest in the crypt .