Phanagoria , also Phanagoreia ( ancient Greek Φαναγορεία ), was the largest Greek colony on the Taman Peninsula on the Cimmerian Bosporus in ancient times and an important trading town for centuries. After Pantikapaion, it was one of the capitals of the Bosporan Empire and in the 7th century the capital of the Greater Bulgarian Empire .

Location of Phanagoria between the Azov Sea and the Black Sea 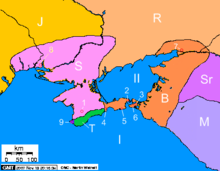 Crimea and the Sea of ​​Azov in the 2nd century BC Chr.
2 - Pantikapaion
3 - Phanagoria
6 - Hermonassa

Phanagoria is located on the eastern side of the Kerch Strait , which connects the Black Sea with the Sea of ​​Azov . The city was built on the northern side of the tip of the Taman Peninsula, a few kilometers east of Hermonassa . About a third of the former urban area is now under water.

Phanagoria was born in 543 BC. Founded as a colony by Teos . In the 5th century BC The city was incorporated into the emerging Bosporan Empire. She was then under constant threat from the Scythians . After the ruling dynasty died out, the empire fell around 107 BC. To Mithridates VI. of Pontus, who installed his son Manchares as king. During the Mithridatic Wars , Phanagoria sided with Rome and remained allied with Rome thereafter. In the 4th century it was destroyed by the Huns .

In the 7th century Phanagoria became the capital of the Greater Bulgarian Empire founded by Kubrat . The last Bulgarian ruler was Batbajan (or Vatbajan), son of Kubrat. Later it fell under Khazarian and Byzantine influence. The Byzantine Emperor Justinian II lived there around 700 as a refugee and brother-in-law of the ruler of the Khazars.

In the 10th century the area was conquered by the Kievan Rus and Phanagoria was ousted by the Tmutorokan built on the ruins of Hermonassa . In the 11th (?) Century the city became a trading point for the Venetians and Genoese and in 1349 the seat of the Archdiocese of Matrega . In this city, one of the Genoa families, who had seen no opportunities for advancement in their hometown or in the mighty Caffa , dominated the Guisulfi, above all Simone de Guisulfis. He held the post of custos castri Matrege between 1410 and 1415 and was referred to as dominus Matrege , i.e. lord of Matrega, in the early 1440s . A little later, Matrega fell under Crimean Tatar / Ottoman rule and then no longer played a role.

After Russia conquered the area in 1792, excavation work began in the 19th century, which led to the uncovering of part of the city and the necropolis. In the 20th century, the underwater parts of the city were explored.

In August 2016, a marble column was excavated by Darius the First .