The Philadelphiad was the 300th anniversary of Germans in America , which was celebrated in 1983 in Krefeld and Philadelphia in the USA .

In 1983, the Deutsche Bundespost took the Philadelphiade as an opportunity to issue a special postage stamp .

The background of the celebrations was the memory of the first organized immigration of a closed group of Germans in America in 1683. At that time, 13 Krefeld families, mainly Quakers and Mennonites , landed with the ship Concord in Philadelphia in what is now the United States.

See also : History of the Germans in the United States

The intention for this first big wave of emigration of German citizens was the persecution of Protestants and people of different faiths (non-Catholics). The liberal city ​​of Krefeld initially offered refuge for many religious refugees from the surrounding area. Among them was part of the 13 families who later emigrated to America. But soon there were more refugees than the city could handle. There was increasing dissatisfaction with the immigrants among the Krefeld citizens. The situation was further exacerbated by the fact that Mennonites and Quakers held their own meetings and were accused of rebellion. The real reason, however, may have been the envy of the mostly poor citizens of Krefeld, because the majority of the refugees were capable business people and craftsmen and continued to maintain their old business relationships very successfully even in exile.

The governor of Pennsylvania , William Penn , promised all German settlers enough arable land and complete freedom of expression and religion . Penn had inherited the land in North America , which he named "Pennsylvania" from then on . The biggest dilemma, however, was that this country did not have a particularly large population, who in the end would also increase Penn's fortune through the acquisition of land and ensure prosperity in the new country. So settlers had to be here, and they should be godly people, who ideally should also be Quakers like Penn, not least to keep the peace.

The German lawyer Franz Daniel Pastorius was a friend of Penn. He was commissioned by the newly formed Frankfurt Society to purchase land in Pennsylvania for German Quakers willing to emigrate to America. This may also have been the reason why most of the so-called "Original 13" from Krefeld, who were actually mainly Mennonites, converted to the Quakers. Pastorius organized the move with the ship "Concord" and came to Philadelphia in August 1683 with the ship "America" . He immediately took possession of the acquired land for the expected settlers and prepared all the necessary formalities. Pastorius founded the town of Germantown , the first German settlement in the New World, on the acquired land . On October 6, 1683, he received the settlers in the port of Philadelphia.

By 1790, Germantown had grown to over 3,000 residents, mainly Amish , Quakers and Mennonite religious refugees from the Electoral Palatinate , the Rhineland and Württemberg . 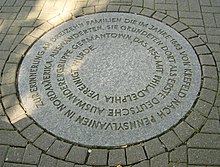 Memorial stone for the emigrants in Krefeld 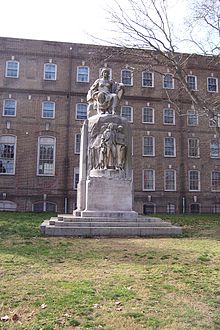 Memorial in Vernon Park, Philadelphia, in memory of Franz Daniel Pastorius and the original 13 , state April 2008

Inscription plaque of the monument

Tönes Coenen was the progenitor of a number of well-known personalities. His descendants include Samuel Cunard , the founder of the Cunard Shipping Line , and Charles "Pete" Conrad , an astronaut on four NASA missions , including Apollo 12 .