Pierre Stutz (born November 7, 1953 in Hägglingen ) is a Swiss Catholic theologian and author . 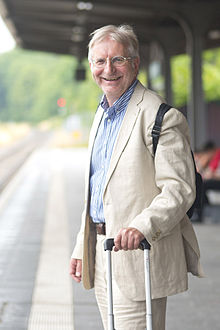 As the fourth and youngest child, Stutz attended the Institut Catholique in Neuchâtel from 1968 to 1969 after finishing school . He then attended middle school and in 1974 entered the Catholic male order of brothers of the Christian schools (school brothers) as a novice , which he left again in 1978. Stutz left Neuchâtel in 1978 so he could study theology in Lucerne , and in 1985 he was ordained a priest of the diocese of Basel . From 1985 to 1988 Stutz worked as a youth pastor in the Fricktal and was then federal director of the youth association of young congregations in Zurich until 1992 .

From 1988 to 1998, Stutz was a lecturer for youth pastoral care at the Catechetical Institute of the Theological Faculty in Lucerne . From 1990 to 1996 he trained part-time in social therapeutic role-playing at the Adelheid Stein Institute in Munich . A personal crisis in life brought him back to Neuchâtel in 1992, to the Abbaye de Fontaine-André, above the city of Neuchâtel.

In 1994, together with the Frères des Écoles Chrétiennes von Fontaine-André , he initiated an “open monastery”, a community of women and men, including married ones, who live together and seek spirituality in everyday life. From 1998 to 2010, Stutz was co-editor of the spiritual photo magazine ferment . In the summer of 2002, Stutz resigned from his priesthood. He has been with his partner Harald Weß since 2003, they are married and live in Osnabrück.

Pierre Stutz sold over a million books. His works have been translated into six languages.

One of his theses is that each and every individual must find their own way of spirituality and faith in order to be able to live both liberally. The way to achieve such an individual spirituality runs through rituals and through consciously dealing with one's own emotional wounds.

Today Pierre Stutz appears in the entire German-speaking area as a speaker and spiritual teacher with lectures and gives seminars on the topics of mindfulness, inner reconciliation and one's own spiritual path. He is represented at Protestant church days and Catholic days as well as in church conference houses, monasteries and spiritual centers. The Herbert Haag Foundation, which honors people and institutions who expose themselves to Christianity through free expression and courageous action, honors Pierre Stutz with the Herbert Haag Prize 2020.