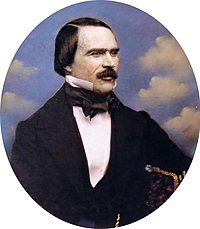 Ramón Cabrera y Griño , in Catalan Ramon Cabrera i Grinyó , Count of Morella, Marqués del Ter (born December 27, 1806 in Tortosa , † May 24, 1877 in Wentworth ) was a military leader of the Spanish Carlist .

Cabrera had not been able to come to terms with the "Fraternization of Vergara" of 1839, which ended the First Carlist War . He continued the war in Valencia and Catalonia until 1840 , when he was defeated and had to flee to France . In order to force him to give up, his mother was shot .

Execution of Cabrera's mother, Maria Grino, by firing squad in 1836

During the so-called Second Carlist War (also called "War of the Matiners"), which took place in Catalonia from 1847 to 1849 , Cabrera was military leader of the pretender Don Carlos (VI).