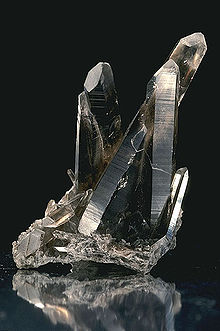 Smoky quartz (or morion ) is a variety of the mineral quartz that has been colored gray-brown (smoke-colored) to black (morion) by natural or artificial gamma rays . Mostly, brown smoky quartz is transparent to translucent. Well-formed smoky quartz crystals are rarer than comparable rock crystals , but they are still found relatively often.

The name smoky quartz goes back to the color of this quartz variety. The name Morion, which is also frequently used for the dark gray-brown to black variety, can be traced back to the Roman historian and naturalist Pliny . He called the mineral in his encyclopedia Naturalis historia (Book 37, Chapter 173) mormorion . In German-speaking countries, the name became Morion garbled .

Smoky quartz mainly forms in granitic pegmatites , but can also arise in alpinotype quartz veins and in cavities ( geodes ) of volcanic rocks .

As a frequent mineral formation, smoky quartz can be found at many sites around the world, with almost 2400 sites documented so far (as of 2019). Crystals several meters in length are often discovered. One of the largest smoky quartz crystals discovered worldwide is a crystal found in Kazakhstan that weighs 77 tons.

Well-known find areas are among others in Australia , Brazil , Madagascar , Russia , Switzerland , Scotland , Ukraine and the United States .

Smoky quartz is only processed into gemstones and art objects . Occasionally, the name “Rauchtopaz” is found in the trade, although this is one of the forbidden trade names.

From aluminum-containing rock crystals (colorless quartz) it is relatively easy to produce smoky quartz by artificial irradiation, which is done in large quantities , especially with quartz from Arkansas (USA). The Arkansas location can therefore always be viewed as suspicious for smoky quartz. Smoke quartz produced by irradiation does not pose a risk, however, since no radioactive isotopes are produced in this process .