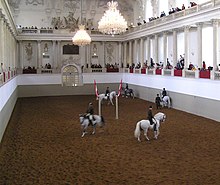 Riding arena of the Spanish Riding School in Vienna

While halls in Northern Europe are closed buildings due to the climate , in Southern Europe there are also often open riding arenas without windows, which only include the riding arena and a roof. The term Reitbahn describes a mostly rectangular, delimited space for horse training . Riding arenas are usually designed as free-standing riding arenas or in combination with stables as part of an equestrian facility, but can also - as with the Spanish Riding School - be integrated into other buildings. 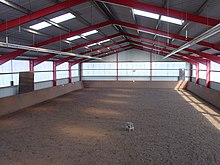 Riding school in a riding arena

The standard dimensions of riding lanes today are usually 20 × 40 m, although smaller formats were also found earlier. Larger halls of 20 × 60 m allow the implementation of higher dressage tests, those of 25 × 50 are suitable for jumping tournaments.

The edge of a riding arena is usually realized as an inclined band made of wood. Their inclination of about 10 ° relative to the vertical is intended to prevent the rider's foot from being caught by the wall and turned around. The woods used should be as thick as possible to prevent a horse from walking through them. Bands can be made of panels or boards that run parallel or perpendicular to the floor. The best boards are made from oak boards that run parallel to the ground.

The floor (footing) of a riding arena must be non-slip, absorbent and resilient. Mixtures of sand and sawdust are possible, but sand / leather mixtures or rubber mixtures, for example from shredded car tires, can also be found . Depending on the intended use, the soils have a different composition. So floors for dressage are generally softer sprung, while jumping floors are harder and more slip-proof.

Riding lanes have doors in the gang through which the riding lane can be entered and exited. Different constructions of such doors have been developed in order to enable the inclination of the gang in the door area. Outward-opening swing doors have proven to be the best , as they only require little effort to open and maintain their position. An alternative door shape is an inward-opening sliding door that is suspended above the door. When you enter the hall - i.e. open the door - you should shout " Door free " and, if necessary, wait for the answer " Is free " to prevent a collision with other riders.

Markings, for example in the form of letters and dots, are often attached at certain points on the arena, which are used for orientation when executing track figures .

Maintaining the floor of a riding arena includes "hoofing", in which soil material heaped up on the hoofbeat side running along the gang is removed from the gang, harrowing with a not too deep harrow (to loosen up and improve suspension), the removal of manure and in summer moistening to reduce the development of dust to protect the horses. Special arena planners can be used for floor maintenance .