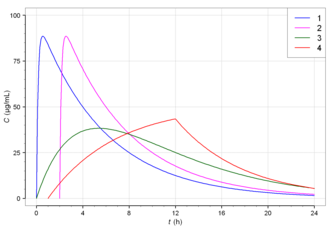 Retard ( Latin : slow-acting; English sustained release (SR), extended release (ER, XR), controlled / continuous release (CR) ) refers to a drug form in which the drug is released more slowly. Unlike depot dosage forms is meant by sustained-release pharmaceutical in the narrow sense orally administered dosage forms. Both terms are often used synonymously with one another. Drugs that are absorbed with a delay due to their pharmacokinetic properties or, in the case of prodrugs, are only converted into their actual active form by the organism, are not, however, sustained-release drug forms.

The pharmaceutical technology offers a number of ways, sustained-release preparations to manufacture, this is called Retardgalenik / sustained-release pharmaceutical technology. The simplest form is a tablet with a special coating, such as that used in gastro-resistant drugs. The sustained- release capsule , which contains small active substance-containing sustained- release pellets , which are released after the capsule shell has dissolved, is widespread . Tablets in which pellets are compressed into tablets ( Multiple Unit Pellet System (MUPS) ) are also increasingly being used . More complex forms store the drug in a slowly eroding matrix. Another possibility of retardation is the oral osmotic system .

Time course of the release

Defined temporal courses of the drug release can be achieved by means of retarding drug forms. Common examples are:

Sometimes retarded forms are combined with a fast-acting initial dose ( bolus ) in a tablet or capsule .

Areas of application are, for example, blood pressure regulating drugs or hormones . Retardation is used to prevent dangerous short-term high concentrations of drugs in the blood (plasma peaks) and / or to achieve the longest possible effect of a drug from a single drug form. By avoiding plasma peaks, side effects occur less frequently, and the long-term effect means that a patient has to take the drug less often, for example only once a day, which increases compliance .

Extended-release tablets must not be taken in a mortar , as this will cancel out the delayed release of the active ingredient, which can lead to undesired overdosing.

Other mechanisms of retardation

The term sustained- release preparation in the narrower sense usually refers to special dosage forms to be taken orally . The same effect can also be achieved with long-term preparations in which the drug itself has been chemically modified in order to achieve a slower effect. Depot preparations for parenteral use also have a delayed effect due to a slow release, for example from muscle tissue, into the bloodstream.