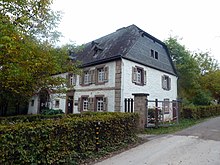 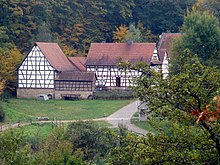 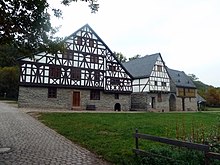 Four complete villages were built here to demonstrate the former village life in the various regions of the state . The four villages, for which a total of 36 historical buildings were dismantled and rebuilt true to the original at different locations, represent the regions of Hunsrück / Nahe , Middle Rhine / Westerwald , Moselle / Eifel and Rheinhessen / Palatinate .

In 1972 Bad Sobernheim was selected as the location by the state government of Rhineland-Palatinate. The city made the nightingale valley available. The first building for the museum was dismantled in 1975.

On the night of September 20, 2011, a fire broke out on the open-air museum's building yard. Components from around 15 historic houses from all over Rhineland-Palatinate were stored there, which were to be built on the grounds of the open-air museum. There was damage of several hundred thousand euros.