This article deals with the Riebel corn dish; further meanings can be found under Riebel (disambiguation) . 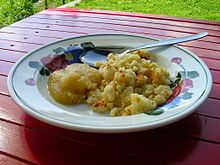 Ribel, made from Rheintaler Ribel corn, in a frying pan - seared and ready to serve.

Riebel (Switzerland: Ribel ), also known as Stuffer , Pflutta or Brösel (Montafon), is a simple corn dish from the Vorarlberg and St. Gallen Rhine Valley , the border region between Liechtenstein , Austria and Switzerland . The Rheintaler Ribel has been a protected designation of origin in Switzerland since August 2000 .

In the past - until around 1970 - it was mainly a meal for poor people and peasant families. Riebel was mainly eaten for breakfast. The dish is made from a mixture of white corn and wheat semolina and is usually eaten with coffee or milk.

In other areas of Austria a similar dish is known: Sterz (from stürzen ) or Türkensterz , because the corn in Austria was called “Türkenmais”, “Türken” or the Slavic name “ Kukuruz ”.

For the typical Riebel, corn and wheat semolina are boiled in milk with a little salt until a solid paste is formed. In the past, the porridge was often prepared the evening before and left to stand (rest) overnight, covered. After that, the porridge is slowly baked (up to an hour) in a pan with butter or lard . Constant poking ("disturbing") with a flat wooden spoon creates the riebel (round, slightly baked, irregular lumps of semolina). In its simple and most common form, it is eaten with coffee or milk.

With a little sugar, the Riebel can be turned into a simple dessert . It is often consumed with applesauce or compote (previously also dried pears ). Another variant is to mix in fresh cherries while baking (Kriesi-Riebel).

Later, the Riebel was replaced somewhat by the modern breakfast ( rolls , croissants , cornflakes or muesli ). Riebel is still valued and eaten today in Vorarlberg, Liechtenstein and Eastern Switzerland (especially the Rhine Valley).
It makes a filling, vegetarian and inexpensive meal.