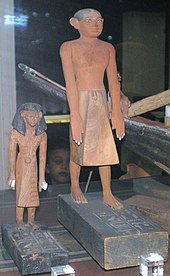 Statuettes from the "Tomb of the Two Brothers" from Rifeh

Rifeh ( Arabic ريفا, DMG Rīfā , orدير ريفا, DMG Dair Rīfā ) is a village in Middle Egypt , near which there are extensive necropolises that date from the First Intermediate Period to the Ptolemaic Period . It is the burial place of the district capital Schas-hotep . Extensive excavations were only carried out here in 1906/1907 by Flinders Petrie .

During the excavations, various grave fields were found, most of which had already been heavily robbed. Most of them are simple burials. In addition to the ceramics, the so-called soul houses, small clay house models that marked the location of the graves, were also found.

In the desert, a little higher up, there are some large rock tombs, some of which belonged to Gau princes of the Middle Kingdom , but also to local officials of the New Kingdom . In the courtyard of one of these graves, the burial of two brothers was found, which had not been robbed and contained two sets of coffins, a canopic box and wooden model figures.

Papyri from the cardboard boxes - the Rifeh masks

Cardboard is the term used in Egyptology and papyrology for papyrus - glued together from several layers. When they are damp, they are especially good for modeling irregular surfaces. This method was used in the funeral workshops to make coffins, masks or slabs to cover all or part of the mummified and wrapped body. Mummy coffins were made from approx. 6–8 layers of single sheets glued together. The plastered surface ( gesso ) provided an even base on which to paint motifs that would last longer than was possible on a linen cloth.

Because documents or scrolls were also used for the larger covers, Petrie came up with the idea of ​​recovering these papyri from the death masks, which were exceptionally well preserved. He wrote a report from his excavation from 1907:

"'At Rifeh some cartonnages made up of papyri were found. I damped, opened, and cleaned them, and then the Greek were submitted to Drs. Mahaffy and Smyly , and the demotic to Sir Herbert Thompson . '"

Translation: “ Some papyri cardboard boxes were found in Rifeh. I steamed, opened and cleaned them and then the Greek were given to Drs. Mahaffy and Smyly and the demotic to Sir Herbert Thompson ”.