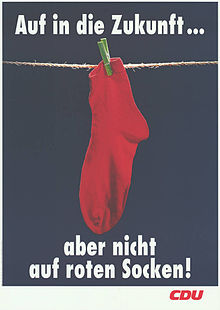 The term red sock is a term for a politically left-wing person, which is usually meant to be pejorative .

The exact origin of the phrase is unknown. It was already used during the 1968 movement , but it could be a lot older. There is reason to believe that this should be linked to the older swear word “Gesocks”. In the GDR , “red sock” was a mocking term for members of the SED who were not open to criticism. 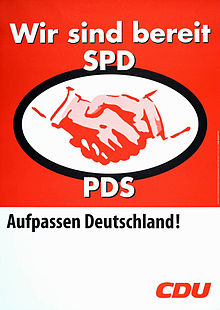 The SPD / PDS handshake on a CDU election poster from 1998

In the 1990s, red socks served as a polemical term and sometimes as an election campaign motif, with which political opponents referred to members of the PDS . The term was spread especially in the election campaign for the 1994 federal election through large-format posters by the CDU , which addressed a possible coalition of the SPD and PDS or the tolerance of a red-green minority government by the PDS. Such a minority government had been formed for the first time in Saxony-Anhalt shortly before ( Magdeburg model ). A clothesline was depicted with a red sock dangling from a green clip. The slogan of the campaign posters was: "To the future, but not in red socks". In particular, the then General Secretary of the CDU, Peter Hintze , pushed this campaign. The historian Philipp Ther sees this allusion to the emotions of the Cold War as one of the decisive factors for the narrow election victory of Kohl's black-yellow coalition .

The PDS itself took up the campaign aggressively and reinterpreted it as advertising for itself. Numerous own promotional items, for example "real" red socks, were produced. Other parties, such as the FDP , also took up the motif for their own campaigns.

In the 1998 federal election , the CDU attempted a new edition of the campaign, the Red Hands . After the then Saxony-Anhalt SPD Prime Minister Reinhard Höppner announced after the state election that he wanted to continue to form a minority government with the tolerance of the PDS, the CDU tried to use this for its federal election campaign. The poster showed the modified logo of the SED , which represents the handshake between Wilhelm Pieck and Otto Grotewohl . The CDU added the inscription: We are ready SPD PDS ; including watch out Germany! CDU.

However, the Red Hands campaign was unsuccessful. The SPD internally agreed that cooperation with the PDS at state and municipal level in the new federal states would be possible, but would not be an option anywhere in Germany. Shortly afterwards she countered with a poster that showed torn red socks and the words What you can rely on with the CDU: Always the same policy, always the same advertising, no new ideas . Within the CDU, however, the action caused a dispute. Leading East German state politicians distanced themselves from the poster when it became apparent that the party base in the East German states only hung up the poster sporadically or not at all.

The managing director of the Forsa Institute Manfred Güllner said in the run-up to the federal election in 2009 about any attempts to revive the campaign: “You can't run such a flat campaign today.” Political advisor Peter Radunski , former election campaign manager of the CDU, warned in the taz : “For disappointed social democrats that would motivate them to go to the polls after all. "The political scientist Franz Walter said in an interview that nobody fears the downfall of Germany if Heiko Maas becomes Prime Minister in Saarland with the votes of the Left," and is in eastern Germany every red sock campaign a kind of economic stimulus program for the left. "